The AH-50 Helicopter is a light transport/attack helicopter featured in Crysis 2and Crysis 3, used primarily by C.E.L.L troops. It is also used by the United States Marine Corps.

The gunship variant of the AH-50 is equipped with two HMGs, one on each side, which are controlled by two gunners. The AH-50 also has two rocket pods, also one on each side, one located directly above each landing gear. A single hit from a rocket causes a great deal of damage, but these are seldom fired.

This vehicle is only featured in singleplayer and is not drivable or usable by the player. AH-50s are seen on many levels, but only attack the player in some levels. The AH-50 is seen in usage by the Marines as they redeploy to Manhattan after the Ceph are defeated.

The AH-50 attacks Alcatraz for the first time in the mission "Road Rage," but, at that time, the player sits in an heavily armored ICV and may just blast the Helicopter away.

JAWs, dismounted HMGs and L-TAGs are effective against the AH-50. Usually, killing the HMG gunners will also cause the AH-50 to retreat. However, the AH-50 may come back and fire its missiles at you. 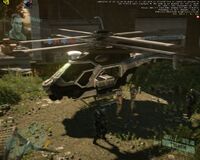 Alcatraz watching a AH-50 preparing to take off