Estimated to be dozens of meters

Archangel was a C.E.L.L. satellite weapon that was built by CryNet Systems in 2021. Originally a key regulator of C.E.L.L's energy power grid, the platform was later used as a key weapon during the Human-Ceph War and later, to destroy the Resistance and any threats pose to C.E.L.L.

Originally a core component of the global power grid. Archangel is the key regulator platform of C.E.L.L.'s new wireless energy grid after the events of Crysis 2, though widely known to public as that. In reality, Archangel's massive global energy store can be dispatched via an energy-boarded weapon to ensure the destruction of hostile enemies and triggering a metropolitan depopulation event in progress.

There existed a number of protocols within Archangel for many outcomes as an orbital beam cannon capable of delivering devastating orbital strikes against ground targets. The most aggressive protocol is "Red Star Rising", which correspond of a Ceph Stage Three event, it will be deployed as an emergency failsafe to kill the Alpha Ceph should it escape confinement in New York City.

Archangel's power varies depend of the outcomes its protocols "designed". A fraction of its power vaporized HMS Robin Hood, a cutting edge carrier-sized warship with invisibility employed from the Nanosuit, a significant portion of Hudson River and the entire back of Dane's evolved Nanosuit 1. While as "Red Star Rising", though only destroyed several skyscrapers when only about 5% of its power, based on Claire said how lucky they are, it is suggested that 5% of its power is some sort of "turning point" making it capable of vaporizing a large metropolis like New York.

As Archangel draws power from the Alpha Ceph, while unknown to C.E.L.L. scientists at first, it is expected for the energy it feeds on the Alpha Ceph caused a chain reaction with Ceph Energy. The consequence is catastrophe as a great section of Earth's crust would be launch into space, resulting a massive global destruction and permanent damage to the planet, as well as "punching one of hell a hole on the Earth" and there will be no Earth left as stated by Prophet.

A fraction of its energy can be discharged via other satellites but a single shot still capable wipe out an entire city as showed in Crysis Escalation when Yonkers was bombarded by a satellite.

Archangel is mentioned by Cyrus Harper, the captain of HMS Robin Hood as an orbital weapons platform. This is after he saw thermal imaging showing the city of Yonkers, now completely destroyed with few ruins left as it was hit by a satellite drawing a small fraction of energy of the Archangel.

Later another satellite vaporizes Robin Hood after their position was compromised along with a significant portion of the East River. Resulting even minutes after minutes later, the river hasn't able to fill the vaporized portion while the water was boiled and steams were filling the entire sky.

In Mission 3, it is showed that there are more than 50 satellites (27 of them on one side of the Earth) drawing energy from the Archangel.

C.E.L.L.'s "Red Star Rising" contingency initiated a sequence of events beginning with the placement of Archangel into a transfer orbit which would eventually position the satellite above New York City. Red Star Rising was intended only as a last resort by C.E.L.L. and the full effects and extent of the orbital strike were not known prior to its deployment (or indeed its firing).

Warned by Prophet's visions and through Karl Rasch|'s as-yet-unknown link to the Alpha Ceph, Prophet's team quickly recognize a serious undiscovered threat posed by the Archangel strike. Simultaneously, C.E.L.L. scientists modelling the attack identify the same risk: interacting with the Alpha Ceph - who is a living reactor, Archangel's beam will result in a greatly-intensified explosion that will eject a large amount of Earth's crust into space. This would have been an extinction level event for humanity.

Archangel was employed at full power towards the conclusion of Crysis 3 by Prophet, who compromised the satellite to gain control of its systems and fired the beam weapon at a massive Ceph warship emerging from the wormhole. It is unclear whether Archangel survived the resulting explosion of the Ceph vessel. 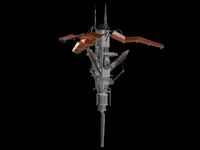