Ceph Devastator Units, nicknamed "Heavies", are powerfully armed and armored Ceph ground forces. They are much larger than the standard alien soldier, though still about four meters high. The heavies are either deployed from drop pods or are stationed at a certain location.

Heavies are around four meters tall (13 feet) and wear heavy armor over their dark red jelly-like flesh. A Heavy's armor is thicker and much more damage-resistant than other Ceph armor, even stronger than a Command Unit's energy shield. Heavies wield a rapid-fire gun along with an arm-mounted missile launcher.

A Heavy is tough enough to barely feel a direct hit from a fragmentation grenade and they can destroy cars and reinforced concrete with ease. They can survive multiple C4, JAW rounds, and L-TAG grenades even on the lowest difficulty.

Heavies are armed with a Reaper Cannon chain gun and a X-PAC Mortar grenade launcher/RPG. They are also physically strong and not afraid to charge their enemies. Their method of deployment on the battlefield may negatively affect their weaponry as the first Heavy encountered can be seen "test firing" it's cannon and mortar. In Crysis 2 their weapons have a slower rate of fire but deal out more damage. In Crysis 3 the player can take and use both Devastators weapons.

Their X-PAC Mortar will make your vision distort, even without a direct hit, for a few seconds.

Because of their lack of mobility, Heavies are easy to deal with as long as the player has heavy weaponry at hand, as attacking them with anything weaker than the Mk.60 MOD 0 or DSG-1 is a near pointless task. They require five grenades from the L-TAG or two C4s to bring down on any difficulty. Two C4s will kill the heavy on any difficulty if they are close enough to him. A heavy will not notice you sneaking behind him, and sticking a couple C4's directly onto him.

Experimental weapons are also effective against them, but do note that X-43 MIKE's short range can get the player in trouble if he or she isn't careful. HMG can also be very cost-effective if players concentrate the fire on its head section, and at the gap between the head armour and torso. K-Volt electrostatic rounds will also temporarily paralyze him. In "soldier" difficulty, a player can kill a Devastator in a head-on shooting with less than 50 HMG rounds if Armor mode and crouching is used for better accuracy and bullets fired in a 2-round short burst manner while aiming down toward their mask/jelly. Heavies cannot be stealth-killed. Five regular grenades and a direct hit with an underbarrel grenade launcher will kill a heavy on any difficulty if the five regular grenades detonate within 3-5 meters of him. In some cases, it is best to avoid them using cloak and passing them by. However, they give 500 Nano Catalyst.

Their armored mask can be knocked out by precision small-arms fire, leaving the jelly-like organism exposed. A few more rounds on that spot will stagger the Devastator, making the killing blow much easier. This is very helpful if the player doesn't have heavy weapons at hand. Their launcher can also be destroyed, making them easier targets.

If taking a stealthy approach to killing Ceph with a Heavy nearby, one should be aware that if alerted to the player's presence, the Heavy will most likely resort to firing its launcher at the player's approximate whereabouts even when using the Stealth Mode, so having some cover at hand is highly recommended. If you can get close to them via stealth, you can use a single MARSHAL shot to take out their mask, followed by another 1-2 on the exposed jelly to kill them. 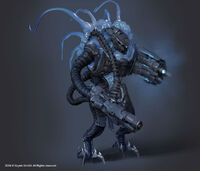 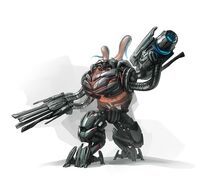 Comparison between early and final design 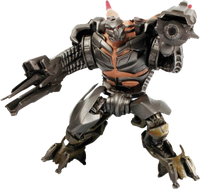 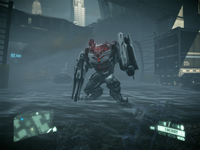 A Ceph Devastator during "Semper Fi or Die"