A Walk in the Park

Ceph Combat Units, commonly called "Grunts", share the title of most common type of hostile Ceph encountered along with the Ceph Stalker in Crysis 2 and Crysis 3.

Ceph Grunts stand at roughly 8 feet tall, towering over most humans. They appear as upright, armored-up versions of Ceph Stalkers - like most Ceph soldiers, a Grunt's weak spot is located on their uncovered neck/back area, and belly.

While Grunts lack the speed and mobility of their Stalker brethren, they make up for it with stronger armor, and more powerful Assualt Rifles. When killed, Grunts somewhat explode or burst, with an area of the Grunt's armor falling off and the substance inside the exo-skeleton losing its glow.

The Ceph Grunts lack the speed and mobility of a Stalker, to make up for that, they have stronger armor and greater firepower. Despite seeing walking all the time, Grunts have moderate speed and can perform high jumps with ease. Their jelly spots are almost entirely covered with armor, making them harder to kill, though X-43 MIKE and K-Volt can easily bypass their defense. A Grendel, having a high armour penetration, will have a good chance to kill them.

It is noted that they can also charge up their rifle to fire a large burst of lethal energy beam that can cause large explosion and even destroy armored vehicles. In addition to that, they can also fire EMP burst at short range that drains out the Nanosuit's energy and immobilizes and likely killes any normal humans within its vicinity, usually done when they know you are cloaked. They also can fire a short range grenade form of this EMP.

Alongside with Stalkers, Alcatraz stated that it will take 4 to 5 armor-piercing bullets, each capable of blowing away a good-size reinforced concrete, precisely at their jelly spot to even take them down.

Grunts are armed with aPinch Rifle. At close quarters they will use arm-mounted blades to melee. They can emit an EMP burst to instantly drain the players energy when they are cloaked, and occasionally use timed grenades.

Grunts behave like typical C.E.L.L. operatives, taking cover and popping out to fire their weapon at hostile units, unlike Stalkers. For examples, they will just hold their weapon round the corner and fire blindly. When not alerted, they patrol an area regularly, usually jumping onto high vantage points. Standard human tactics apply, but Grunts are much tougher than humans, and the weak point is no longer the head, instead the exposed jelly on their back. When alerted, they will hem you in, working on where they have last seen youHowever, when you shoot the face plate, it will fall off. The tentacles are a weak point.

A Grendel will be effective at dismantling them.

Do Not use grenades, as Grunts will quickly jump away from them, and jsut get alerted. However, you can use under-barrel grenade launchers, as they explode on impact.

X-43 MIKE's will boil their insides out.

As with all of the Ceph infantry, a HMG will quickly dismantle them with a few shots. 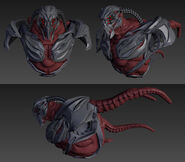