The Ceph Hunter, also known as a Hunter, is a massive quadrupedal Ceph machine appearing in Crysis and Crysis Warhead. Analogous to a combination of a tank and VTOL aircraft, it is one of the most powerful units in the Ceph arsenal, second only to the Ceph Warrior. In its typical stance, its legs span over 100 feet.

There are several variants of the Hunters. The Hunter in Reckoning is lighter colored than previous Hunters and has blue theme. A Hunter in Crysis Warhead is red and equipped with more weapons.

In Crysis, the Hunter is first seen in Core and is first encountered in Exodus. Due to its shields, the US forces are unable to defeat it, only delaying its advance. During Reckoning, a Hunter attacks the USS Constitution, but Helena Rosenthal sends a signal through Nomad's Nanosuit, disabling its shields and weakening it slightly allowing him to destroy it.

In Crysis Warhead, Psycho, with the help of Dane and his Nanosuit team, takes one down. Psycho then confronts the more powerful red variant on his own at a later point in the story.

The Hunter's Molecular Arrestor (MOAR) takes several seconds to charge and is capable of freezing the surrounding environment and its occupants. This will kill anyone not wearing a Nanosuit and render any vehicles unusable while temporarily freezing any Nanosuit users. Any damage will shatter and instantly kill a person while frozen. The Hunter also can fire a Singularity Cannon that causes a devastating explosion. The Singularity Cannon takes slightly longer to fire than the MOAR, giving players extra time to find cover. Its legs are also extremely potent weapons; they can both crush large objects against the ground and pick up the same to fling them at the enemy. When close to the Hunter, its mouth opens up and a tentacle will grab nearby enemies and throw them. This attack is only lethal if not in Armor mode. While shielded, the Hunter is invulnerable, so players should pay attention to when the shields are down. The weakest part of the Hunter is its mouth area. The Minigun is the most effective weapon at destroying a Hunter. 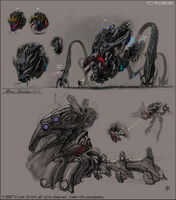