Ceph Armored Assault Units, also known as "Pingers", are large Ceph tripod, automated machines in Crysis 2 and Crysis 3. They act as the level bosses and are incredibly tough and highly damaging.

The Pinger appears as a huge, heavily-armored tripod combat walker, roughly 18 feet in height. Its large triangular head has two tubes on each side of its head and two guns mounted under the chin. The two digitigrade-built forelegs act as the Pinger's locomotion while the third rear leg acts as a stabilizer when stationary. Each leg has three talon-like toes.

The Pinger is a powerful and terrifying war machine.

Its EMP "ping" has the power to shatter Hargreave-Rasch building's glass that previously held millions of tons of water, and objects such as furniture, wooden boxes and cars, or even a fishing ship. It can withstand armor-piercing bullets that hit it from either side. Its "ping" can kill or damage any life form within 50 meters.

Its armor allows it to easily withstand HMGs, and 4 charged hits from its plasma cannon are enough to take down Alcatraz. Multiple C4s and the collapse of a 3-story tall building doesn't damage it. Even after an hour of constant run-and-hit attacks from an entire division of Marines, only a JAW could bring it down. It can use high-frequency click bursts or "Echolocation" to detect devisible targets.

Their name was first briefly mentioned in the trailer "The Wall" when a missing poster is shown of James Thomasson. There is a post-it reading "Last seen at Central Park. Pinger Attack." They were first shown in a teaser trailer for E3 2010. In a gameplay video for Crysis 2 at E3 2010, a Pinger was fought against and later shown in a cinematic.

After Alcatraz joins the Marines fighting the Ceph in Midtown, a Marine can be heard shouting to his squadmates to block their ears to stop the noise. This is assumed to be a Pinger, although it cannot be seen, due to Alcatraz's position in the sewer. Pingers appear in "Corporate Collapse", "Terminus ", "Power Out", and "Out of the Ashes", though only the first three can be fought directly; the fourth appears during the vehicle-riding sequence, where it can be destroyed with the IFV turret. Once destroyed, a single Pinger leaves behind 2,000 Nano Catalyst.

Following the events of Crysis 2, Pingers are deactivated and left abandoned in the New York ruins and overgrown until their reactivation by the Alpha Ceph.

A deactivated Pinger can be found in Safeties Off and can be used against Ceph Scorchers in the area. It will then proceed to explode soon after.

A few can be seen in later levels and are somewhat uncommon. However the player will have some highly explosive weaponry against them laying around near one (usually an APC, JAW missile Launchers or C4).

The last Pinger to appear in-game is in Gods and Monsters near the secondary objective that contains an APC (though not drivable, its mounted gun can still be fired), some bots that can be hacked and the rare X-43 MIKE.

The Pinger is armed with the same energy-based chaingun utilized by the Ceph Gunship, as well as an EMP projector and a cannon similar to that of a Ceph Devastator. The shrieking-like noise it makes during normal operation and when firing its EMP is implied to cause large amounts of hearing discomfort or even pain, and is inferred to be the source of the name "Pinger."

The Pinger periodically fires EMP-based blasts that will completely drain the player's suit energy if close enough, and has the capability to know their position even when cloaked. If the player does cloak, the Pinger will stop shooting at the player, but will instead stop its patrol and start to fire EMP blasts at a more frequent rate. It also will look directly at the player, somehow knowing where he/she is, but will never fire its main gun. If the player goes behind cover, even while cloaked, it will fire an energy blast with a timed explosion behind their cover, and will continue firing them until it successfully flushes the player out.

Even though the Pinger's armor is thick, it can still be hurt. Its most vulnerable part of their body is the generator, which is identified as a glowing red object and damaging it allows for increased damage. Some weapons are more effective than others against the Pinger. The MK60 Mod 0 should be the player's staple weapon against one, but a weapon with the Gauss attachment also works; JAW's and packs of C4 (usually at least four) - if available - should be used against the generator. Though it takes some skill, an L-TAG can prove just as deadly as the JAW. Experienced players can also use grenades. Hold grenade until screen shows "arm loss immediate". Then throw the grenade and wait. However a jackal is an incredibly fast way to take it down 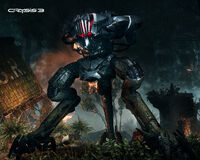 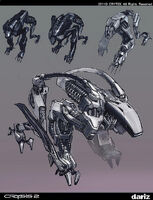