Scorchers are four-legged Ceph units that were encountered by Prophet in Crysis 3.

The Ceph Scorcher is a four-legged ceph unit possessing the ability to shoot fire. A type of alien flamethrower weapon called the Incinerator can be acquired from this type of alien machine, though it may self destruct, making it impossible to retrieve.

The Ceph Incinerator Drone is a new element in the Ceph arsenal. Exploiting the higher combustibility of materials in Earth's atmosphere, the Ceph have developed a quadrupedal drone capable of dispersing liquid plasma over a wide area. The plasma has an extremely high attachment rate, and temperatures approaching that of a nuclear core. This weapon becomes inactive when the drone has folded back behind its seemingly impervious armor.

While Ceph Scorchers are slow, their flamethrowers can reach long distances. Arrows are extremely effective against Scorchers. Carbon-Impact arrows to the Scorchers glowing red eye is the most efficient way of killing it.

The Scorcher can also be hacked to stun it briefly, during which time being killed no longer causes it to self destruct and allows the Incinerator to be retrieved. Engaging armor mode and hitting the glowing red eye will make Incinerator retrievable. It is also possible to use the predator bow's electric arrow to kill the Scorcher and retrieve the Incinerator without the Scorcher exploding.

NOTE: Any Carbon-Impact arrows embedded in a Scorcher which are not retrieved before the Scorcher self destructs upon death will be lost in the explosion. (Untested on difficulties other than Post-Human Warrior and Veteran)

>>> The Scorcher (Pyro-Xenus) is a large Ceph combat unit developed to resist ballistic weapon strikes, and also to take advantage of human vulnerability to heat-based weaponry. Originally believed to contain an organic entity, the unit is fully automated.

Scorcher in his attack pose 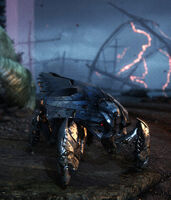 Scorcher in his defensive pose
Community content is available under CC-BY-SA unless otherwise noted.
Advertisement