Survive and continue to operate

The Ceph Spaceship is the main vehicle that carried the Ceph to the Earth in Crysis and Crysis Warhead. It acts like their main base (and Battleship) producing and releasing Ceph out to a global scale to complete their objective in finding more energy for themselves.

The Ceph Spaceship is a massive warship that serves as home and warship for the Ceph. At the start it was thought to be just a temple but the later story revealed a more interesting thing. The Ceph ship appears as a gigantic warship under the earthly skin at the start of the game but is partially revealed throughout the game. The ship is also the cause of the Ice Sphere to form later in the game.

In Onslaught, right after Nomad destroys the boxcar the Spaceship starts to break out of the mountains. In the Awakening level the ship breaks out even more. Inside the mine where Nomad finds Kyong and Helena Rosenthal Nomad watches how the Koreans want to use the ship as a giant source of power, but it causes an energy blast that kills all the Nanosuit soldiers and reactivates Nomad's suit. After the fight with Kyong the gate starts to open and Nomad is stuck down inside the cave. The Core level reveals that the Ship is not just a temple as thought by everyone, but a giant Ceph base. As Nomad travels through it he finds out about an upcoming invasion. In the Paradise Lost level the ship creates the Ice Sphere and releases several Scouts as well as some Troopers. After Nomad makes his way down the mountain and exits the Sphere the Ship is blocked afterward by the Ice Sphere.

The Ceph Ship is seen after the Sphere forms and Psycho exits the submarine. It can be seen throughout the game until Psycho enters the mine in Frozen Paradise. A large amount of electrical energy is seen building up above the ship, and this increases in intensity as time passes. In Adapt or Perish, multiple large;spikes of Ceph design burst out of the ice when Psycho drives the hovercraft over the field of ice, hinting that the ship may have "roots" or hidden connections to the surrounding area.

The fate of the spaceship is unknown after Crysis comic events. From Gould's explanation, a team was sent to investigate the Lingshan Island only to find out the carrier fleet that was sent to deal with the Ceph is completely gone, presumably annihilated while the island was glassed by an "involving party", which could be either the U.S carrier fleet or the Ceph while there is no trace of Ceph or the spaceship on the island.

The ship itself doesn't appear in Crysis 3 but more information is revealed about it. The spaceship is revealed to be a Phase 1 "seeding ship" meant to recon a new planet and adapt to different environments. Its main purpose is to harvest energy to start Phase 2, which is deploying new troops adapted to Earth's environment, such as the ones encountered in Crysis 2. 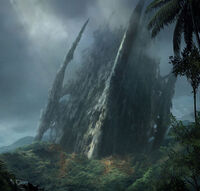 Early concept for the space ship