The Ceph Assault Units, designated as the "Stalkers", are fast and agile Ceph lifeform encountered in Crysis 2 and Crysis 3. They're also the most common alien fought alongside the Ceph Grunt and Tick.

It is likely that the Stalker can stand around 6 feet tall but they are typically found in a hunched, hunter-like stance. Their sleek silver armor consists of the main ribcage area, the helmet, vambraces, and leg armor. Their tentacles notably protrude from their back, making a noticeable weak point. However, only if the body is shot through the tentacles. Also, the belly area is bare, however difficult to shoot at, as they hunch.

The lighter armor-frame of the Stalker allows it more agility and allows greater speeds than other Ceph units. They can. Upon death, Stalkers "explode" or more accurately "burst" and their helmet lamps lose their glow. Their tentacles often spasm for a period.

Their design is changed in Crysis 3. Their body now possess spikes down their back and they abandoned their plasma gun in exchange for sharp and long hand-blade, and the ability to block your Visor and Tags.

In Crysis 2,  the Stalker has shown incredible strength, speed and endurance through the game. They can punch Alcatraz several meters up into air, proving fatal if you are not in Armour mode, and immobilize Alcatraz upon jumping on him no matter how he struggles, moving faster than a trained C.E.L.L. operative could follow. They can also withstand modified armor-piercing sabots from weapons like SCAR/SCARAB.

In Crysis: Legion, their ability is further explored. Multiple fortified sandbags is as good as concealment for them, and the reason why Marines wearing thick spider-silk armor are not dead yet because the Ceph prefers to attack more obvious targets, as Alcatraz states.  A demonstration of the Stalker's weaponry is when a female Marine was torn to small pieces by not more than a few shells from a Stalker, as witnessed by Alcatraz.

In The Wall trailer, military helicopters and the soldiers inside were easily torn apart with a few shells save for a few survivors who didn't last much longer afterwards. A Stalker can be seen easily charging at and dragging a Marine for several meters before finishing him off with a simple melee attack at incredible speed.

Even when one became vulnerable, an entire hollow-point magazine of M12 Nova shotgun shells right into its jelly spots, as well as a beating delivered at the speed of many thousand Gs and, lastly, a throw from a three-story tall building only caused superficial damage to it.

The said Ceph unit still had enough strength to slaughter a squad of well-equipped C.E.L.L. operatives after that, leaving only parts (torso or hands) of their bodies scattered across the field.

Their strength is also ridiculous enough for one to make it impossible for Alcatraz to move an inch even with Strength Mode on. The exoskeleton armor is also tough enough for Alcatraz to question if a missile can put a dent in it. A JAW will vaporize a Stalker however, even without a direct hit. Their "tentacles" are useless and only serve as a distraction.

The major weakness of the Stalkers is the large exposure of their jelly spots, which makes them less tough than any other Ceph units. Among their weaknesses and very much like their bigger and badder brothers of the Ceph Race, they are vulnerable to microwave (X-43 MIKE) or EMP guns (K-Volt). One or two bursts of the Grenedel will dismantle a Stalker, as it almost negates the exoskeletons armour.

In Crysis 3, they are shown to be evolving since the events of the last game. The Stalkers are presumably stronger, faster and tougher than their Crysis 2 counter-part as they are now a melee-focused unit. They become feral, and hunt like a pack. That is demonstrated in Crysis: Escalation, where they were able to withstand large explosions, slice concrete walls and bisect carbon-fiber armored C.E.L.L. operatives to pieces.

Also in the novel, they demonstrate movements so fast that even trained soldiers' eyes couldn't even or at least barely see them. (In one moment, Davis was pulled underwater and chopped to pieces despite being right in front of Chino, Hank and Earl before anyone could notice what happened).

While Stalkers are mostly seen using their arm-mounted blades, they sometimes switch to some form of an SMG on each arm not unlike a Ceph Grunt's usual armament, however it is less acurate and is deloyed in more sporiadic bursts. Because of their mobility, they're far more deadly in melee combat. In Crysis 3, Stalkers switched to mainly melee combat. Their optional SMG is absent in Crysis 3.

Even small arms can kill a Stalker given its exposed frame. When using a precise weapon, the player should concentrate fire on their vulnerable, fleshy part of their bodies, if possible; automatic or explosives weapons such as the Mk.60 MOD 0 or a well-placed Frag grenade can rip apart one regardless of hit location. However, given their high agility, avoid using the SCARAB or Nova, as the Stalker won't hang around.

Grendel will easily kill a Stalker with one or two bursts.

If the player shoots a Stalker with a K-Volt enough, its armor will malfunction, leaving it in a still vulnerable state. The player should take the opportunity to kill it.

A fully-charged melee attack can kill a Stalker on Normal difficulty. You can also stealth kill them.

- Data Origin:Liberty Dome Etherweb. Security level: Semi-restricted resources-
>>>The Ceph Stalker, or 'Remnant' is one of the few Ceph creatures able to function without'
the influence of the hive mind. Though they become wild, animalistic creatures with no higher
brain functions in this mode, these feral stalkers nevertheless remain fierce and lethal hunters.
They have sufficient animal cunning to keep away from our automated defense towers, but all
teams are nevertheless advised to remain on high alert at all times when operating on the dome
floor.
The stalker's ability to remain active without typical Ceph energy supply requires further
study, but worrying field reports suggest that the stalker has the capacity to ingest sustenance
in a more traditional manner...
Dr. Keane
Head of Xenostudy 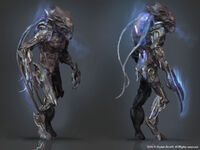 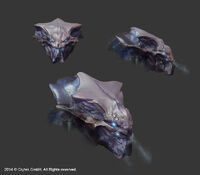 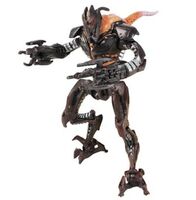 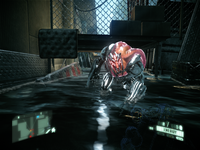 A Stalker charges the player. 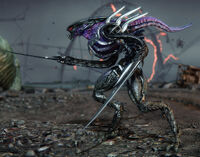