Claire Fontanelli was the commander of the resistance movement in NYC Liberty Dome and serves as a supporting character in Crysis 3.

Claire previously worked for C.E.L.L. as part of the "Work Away Debt" programme, and oversaw the skinning operations which removed Nanosuits from their operators and indirectly responsible for killing them. The suffering inflicted on the Nanosuit soldiers, as well as a bond she developed with one of the soldiers, Psycho, left her emotionally scarred and resulted in her abandoning her job and anti-C.E.L.L resistance, as well as her dislike of the Nanosuit technology. However, she does not reveal her connections to C.E.L.L., especially to Psycho, who also joined the resistance.

Despite her lack of military training, Claire acted from behind the scene in guiding anti-C.E.L.L. fighters.

Claire oversaw the liberation of both Psycho and Prophet from C.E.L.L's clutches. When Psycho brought Prophet to her and believing that he could help their resistance, Claire was doubtful. She dislikes Nanosuits, supposedly because of their close connection to Ceph technology. This dislike leads to friction between her and Prophet, whom she initially regards as nothing more than a machine and his deep integration with Ceph modifications.

While breaking into a C.E.L.L skinning lab to access a Cradle, Prophet and Psycho discovered Claire's involvement with C.E.L.L. and their skinning operations. Claire and Psycho fall out as a result of this revelation, with Psycho leaving both her and Prophet after he tries to defend her actions. However, Psycho later changes his mind, saving Claire and the remnants of the resistance from a Ceph attack.

At the Archangel control center, with the Ceph-controlled Karl Rasch pinning Prophet down, Claire sacrifices herself to free Prophet, suffering a mortal injury as a result. Psycho forgives her as she dies, resolving from this point onward to be known as Michael.

At first when she met Prophet /Alcatraz she was hostile and distrustful of him, fearing his augmentations and similarities to the Ceph. However later she comes to accept Prophet. Due to the skinning conducted on Nanosuit soldiers she suffers a great deal of guilt. It seems Claire had a romantic relationship with Psycho. 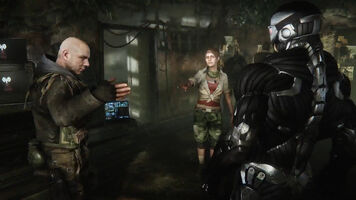 Claire (in the middle) 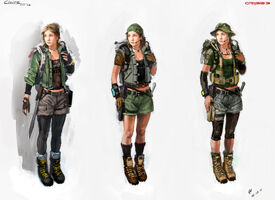 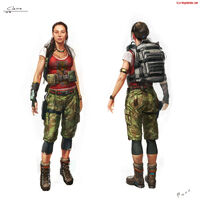