"Our latest offering comes with all the bleeding-edge features you'd expect from Crynet."
―CryNet Systems

The Nanosuit 2 is the second iteration of CryNet Systems' Nanosuit appearing in Crysis 2 and Crysis 3, replacing the older Nanosuit Version One and was introduced four years after the creation of the first Nanosuit, and due to advances in technology is thus vastly more advanced than the N1. Alcatraz and Prophet are the only known operators of the Nanosuit 2. With the introduction of the Nanosuit 2, it is the most technologically advanced piece of hardware in human possession.

The first Crynet Nanosuit, while considered practically perfect, still had its flaws and was already being threatened by the North Korean's iteration of the suit. The Nanosuit 2 addressed the weaknesses of the earlier model, while also supporting a myriad of new features and hardware. First, the original suit's energy efficiency required significant improvement, and the new gold-cobalt oxide lattice boosts the N2's fuel cell capacity by 20%, allowing the operator to remain cloaked for extended durations. As well as withstand more damage, while also giving the suit an additional 32% in strength and speed, allowing for increased physical performance at the cost of less energy consumption than the N1. Also, thanks to the N2's improved CryFibril electromechanical coupling that exceeds 70% under most battlefield conditions, the suit can generate up to 450N of force and up to 10,000G of contractile acceleration for each cm3 of said CryFibril. This allows feats which require massive power to be performed with little to no effort at all, such as pushing a fully loaded fuel wagon which has stood on top of rusted rails for years. Prophet was also able to break a wooden door into splinters and send it flying after kicking it with little to no effort. This implies that with further experience, the N2's maximum strength can become limitless.

Secondly, the suit can absorb energy in a myriad of forms including, but not limited to radiation, static, kinetic, and even carbon released by rotting corpses, and with this power, the suit can become even stronger. The N2 also weighs half that of the N1, thus increasing the speed and agility of the wearer even further. The Ionic Electroactive Polymer (EAP) Liquid Armor (a fast-twitch reflex co-polymer incorporating colloidal doped ceramics and a copper nanolattice in an ethylene-glycol buckyball matrix) gives the wearer unparalleled protection against radiation and physical impact. It also drastically increases motor reflexes (giving users on average a 0.08 millisecond reaction time), and features a dynamic Faraday anti-EMP mesh.

The N1 was only capable of a visual camera feed and the memory of the wearer itself. To solve this, the N2 uses its own Semiautonomous Enhanced Combat Ops: Neuro-integration Delivery AI (SECOND) which is powered by a parasitic blood-glucose infusion and an electrolytic micro stack. The non-sentient chip runs at 1.5 BIPS and instantly integrates remote telemetry and first-person input from up to 6,000 distinct channels (ranging from full spectrum EM to acoustic, barometric, and pheromonal) presenting clear, concise tactical summaries via an interface integrated directly in the visual cortex. It can also take over the operator's purely autonomic and regulatory functions in the event of somatic damage. One of the N2's most innovative features, however, is it's ability to not only monitor the physical and neurological state of the soldier, but to actually optimize them. SECOND continuously regulates dopamine, lactic acid, and corticosteroid levels, anticipates and counteracts debilitating stress and fatigue reactions. The suit also actively augments and maintains the wearer's adrenaline, GABA, and tricyclic levels. It should be noted however that prolonged exposure to antagonistic neuroinhibitory mechanisms can result in long-term damage to metabolic systems.

The Nanosuit 2 is also capable of repairing itself and its user from serious damage in a matter of a few hours, as seen in the case of Prophet when he crashed into Lingshan from outer space at night. The heat generated during his reentry into the atmosphere burned him and his suit significantly, leaving to the suit to repair itself by dawn. The suit also improves and continually evolves upon data collection technology and upon receiving both physical and internal damage. Since the suit evolves every time it gets damaged and reinforces itself to that damage over time, the suit being burned away might have forced the suit to develop into a much more powerful version, being rendered invulnerable to almost all kinds of damage. The suit is known to suppress pain to the point where one cannot feel anything even when just touched, for example, a handshake.

The suit is also capable of seeping into any wound and fix it at an incredibly drastic rate, as seen in the case of Alcatraz, whose damaged lungs were fixed; albeit at the cost of his larynx and the suit permanently bonding into his body and that imminent death would occur due to the fact that his lungs became dependent on the suit's repairing system forever. Because of these features, it is implied that the Nanosuit is not only capable of being a life support system but also capable of permanently immunizing its wearers from all toxins, venoms, and diseases of all forms, known and unknown, biological or human-made. This also implies that the suit has a regenerative healing factor unparalleled by any other type of healing factor, meaning even the Hayflick limit is bypassed because the telomeres are prevented from shortening, allowing a cell to divide indefinitely. The suit also renders aging impossible, as it can store the entire personality and body of its user should they ever part, therefore keeping the original user immortal in some way or another, allowing the user to take some other users' body for their own.

Due to the fact that the safeties prohibiting cell altering within Prophet were turned off, it can be safely said that the Nanosuit 2 is now capable of shapeshifting into anything imaginable whether voluntarily or involuntarily, including humans, as seen by the end of Crysis 3 when the Nanosuit 2 sealed itself within Prophet and restored his human appearance, while retaining all of its powers, or maybe enhancing them.

The development history of the N2 is unknown, other than the fact that it was created four years after the introduction of the first CryNet Nanosuit, and used by Prophet shortly after its creation. Prophet then passed it on to Alcatraz, who was assimilated by the suit and became Prophet.

N2's helmet is visually the same as its predecessor with the exception of some minor detail increases. 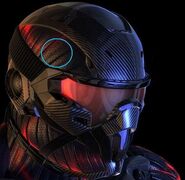 The nanosuit in action.

The introduction of the Nanosuit 2.0 to the market.
Deutsch
Community content is available under CC-BY-SA unless otherwise noted.
Advertisement