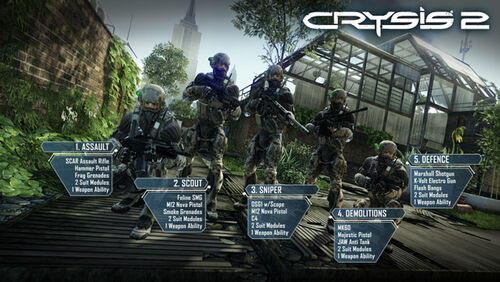 Crysis 2 features a more advanced multiplayer than any of the previous games of the series. This includes a new XP system, Class Customization, 6 Game Modes with variants and Support bonuses. There are 12 maps set in New York City, 256 unique dog tags to collect, 519 Skill Assessments, 23 upgradeable suit modules, 50 ranks to obtain and you can "reboot" the Nanosuit back to level 1 up to five times. Up to 16 players can be playing in a match at one time. An entire studio is working on Crysis 2 multiplayer on its own. Crytek UK were in charge of the development of the game's multiplayer component. Teams are broken down into equal numbers and placed into teams, Marines & C.E.L.L. The Marines are announced by Colonel Barclay, while the C.E.L.L are announced by Tara Strickland.

As of May 31 2014, the multiplayer modes in Crysis and Crysis 2 for PC are no longer playable as a result of GameSpy Technology shutting down all their hosting services. The multiplayer mode in the Xbox 360 and PlayStation 3 versions of Crysis 2 remain playable.[1]

After completing a match, you gain XP. XP serves to both track your progress and unlock new and enhanced weapons and modules. The XP you gain is a combination of your match score, match bonus, and XP earned during that match by fighting other players and completing various in-game objectives. You begin as Cadet I, and as you earn XP, you gain rank. You earn XP differently, based on the game mode, and focusing on killing the other team is not necessarily the best way to gain rank. Focus on completing game objectives, as well as killing the other team, for best results.

In addition to XP gained from matches, you can earn Power XP, Armor XP, and Stealth XP based on how you used your Nanosuit in completing a battle. Actively using your weapons and getting kills in matches also raises the level of those weapons as you meet and exceed certain milestones.﻿ If your experience earned from power, armor, and stealth get high enough, you will rise a level. Each time you get a level, you can get another suit module unlock. If any of these categories get to level six, you unlock additional options of modules.

Crytek's video Crysis 2 - Multiplayer Maps - Flythrough (HD) features a flythrough of all the above maps, excluding Statue and Evac Zone, possibly because they are both variations of other maps.

Support bonuses are map specific support bonuses granted for collecting a right amount of dog tags without dying. To pick up a dog tag, simply kill an enemy and he will drop his dog tag. This adds another aspect to the game since "campers" will not be rewarded with support bonuses if they do not venture out to retrieve their dog tags. (However, there is a nanosuit module called retriever that allows the player to automatically pick up dog tag when he kills an enemy). Collected dog tags do not carry over if you die, however it has been noted that if you die after killing an enemy and you did not collect their dog tag, that it will still be there to pick up. If the player has already been rewarded with a support bonus but he got killed before using it, he has the support bonus after respawning.

Suit modules allow you to increase or enhance specific aspects of your Nanosuit while competing online. You may select one module from each of the three types of modules: Armor, Stealth, and Power. Picking appropriate modules for your loadout and gametype can spell the difference between life and death on the field of battle. The more you use a suit mode the more XP, modules, and powers you gain. Suit modules can also be upgraded through three levels, unlocking new abilities.