Crysis 3 is the fourth and final installment in the Crysis series. It was released on February 19, 2013 in North America, and February 21 in Europe. It was made using CryENGINE 3 and published by Electronic Arts.[1]

After the events of Crysis 2, Prophet's personality, stored in his Nanosuit, assimilates and takes control over Alcatraz's body. Joining with Psycho and a team of elite Nanosuit soldiers, he travels around the world looking for the Alpha Ceph from the knowledge he gained about Ceph existence during the events at Lingshan islands. One by one his team loses interest in the hunt believing that all Ceph are destroyed, until Prophet and Psycho finally trace the Alpha Ceph in Siberia, Russia, only to be disabled by C.E.L.L. using K-Volts. C.E.L.L., now in search of global domination of land and technology, betrays all the remaining Nanosuit soldiers and starts skinning their bodies out from their suits so as to recover the lost alien technology. Everyone involved in the Nanosuit program were either recruited or detained by C.E.L.L., including Scientists Nathan Gould and Claire Fontanelli. C.E.L.L. runs out of Nanosuit soldiers to skin for alien technology that integrated with their suits, so the transfer of Prophet to the facility was requested. Locked in a storage device with powerful EMP shocks to keep him dormant, Prophet is transported to the nanodome in New York City by C.E.L.L.

However, Karl Ernst Rasch comes to know about the corrupt intention of C.E.L.L. and resigns from the post of CEO of Hargreave-Rasch Biotechnologies, deletes all the research done by him and Hargreave of Ceph Technology so as to stop C.E.L.L. from acquiring it and secretly releases a brief video of Prophet's whereabouts, also describing the post scenario after the invasion of New York and the evolution of Ceph, thus requesting the resistance to free Prophet as only he can stop the C.E.L.L. and put an end to their corrupt motives and then joins the resistance. Members of the resistance, including former nanosuit soldiers Psycho, Lazy Dane, and Bandit, are able to free Prophet from the transport ship, which has docked at the New York nanodome.

Psycho explains that in Prophet's 20-year absence, C.E.L.L. used Ceph technology to generate unlimited free energy. Eventually, C.E.L.L. gained a monopoly over the power supply, and used it to drive everyone into debt. Those who could not pay were sent to "volunteer camps." A resistance movement formed in response to this. It eventually freed Psycho from the skinning labs, and he joined their ranks. Tara Strickland from Crysis 2 also helps the resistance politically as a senator, but is unable to do much due to C.E.L.L.'s political dominance. The source of C.E.L.L.'s power generation for the entire world, called System X, is also located in the abandoned and encased New York, which has grown into a jungle. Psycho wants System X destroyed to free the world from C.E.L.L. Prophet, though worried about his visions of the Alpha Ceph showing him the end of the world, agrees.

Psycho and Prophet enter the dome, fighting through C.E.L.L. forces and feral Ceph Stalkers. They reach the resistance headquarters, where they meet Karl Ernst Rasch and Claire Fontanelli, the commander of the resistance. Rasch tries to convince her that Prophet is what the resistance needs to finally overthrow C.E.L.L. Despite affirmations from Psycho, with whom she seems to have a special relationship, Claire is skeptical of Prophet, ostensibly because of the extensive modifications, the integration of Ceph genetic material, and the deep integration with his suit. Grudgingly, she eventually agrees.

Their first target is System X's outer defenses. Despite C.E.L.L.'s capacity for infinite power generation, C.E.L.L. chose to power its defenses with a hydroelectric dam. Prophet hypothesizes that C.E.L.L. does this because it fears something about System X. Prophet, who continues to have visions, disables the dam and then disables the System X facility. It is revealed that System X is the Alpha Ceph. A system program designed to kill the Alpha Ceph when necessary activates, but fails, and the facility self-destructs. The Alpha Ceph fires a beam into the atmosphere to open a wormhole to the Ceph home world in the M33 Galaxy. Through this wormhole, they plan to send an invasion force to invade the planet, revealing their true motives for inhabiting the planet for millions of years. The Ceph hivemind reactivates, and a coordinated Ceph attack ensues. Prophet resolves to kill the Alpha Ceph and end the threat once and for all.

Prophet learns that he must unlock his suit to defeat the Ceph. Prophet and Psycho head to the skinning laboratory to use the cradle to do this and to find out who was responsible for skinning Psycho. At the facility, they see firsthand the atrocities visited upon the Nanosuit soldiers by C.E.L.L. Psycho uses the cradle to remove the neural blocks put in place to prevent the Ceph from taking over Prophet's mind. It also lifts the restrictions on the nanobots in Prophet, and they are now able to transform. Meanwhile, Psycho does more digging into his past, despite orders from Claire. He discovers that it was Claire who had skinned him and the others at the behest of C.E.L.L. Upset, he rebuffs efforts from Claire and Prophet to console him. Claire pleads that he was the reason she joined the resistance, and that she had no other choice. Prophet also claims that he had no other choice, and that he told him what he needed to know at the time of the Lingshan Incident. Psycho finds this unacceptable, as everyone has a choice. He hands Prophet the dog tags of Nomad, Aztec and Jester, and leaves.

Prophet learns that because the Alpha Ceph is creating a wormhole, the C.E.L.L. plans to use Archangel, a satellite based energy distribution platform that can draw power from the entire world's power grid, as a directed energy weapon to destroy all of New York and hopefully the Alpha Ceph. Unfortunately, firing it at the Alpha Ceph would cause a chain reaction that would destroy the whole planet. To make matters worse, the Ceph attack Claire and the resistance. Prophet races to rescue them, but the situation is so dire that Claire tells him to leave them, as they are only holding him back. Psycho shows up with a VTOL and rescues the resistance. They proceed to the Archangel control facility where they shut off the weapon before it unleashes enough energy to set off a chain reaction. Rasch, who had used Ceph DNA to extend his lifespan, is recovered in the facility, but is now under the control of the Ceph. He disables Prophet and tries the same on Psycho, but Claire blocks his attack and Psycho shoots Rasch. No longer under control, Rasch implores the group to leave as the Ceph tentacle renews its attack. Prophet, Psycho, and the injured Claire board the VTOL and engage in a massive air battle, eventually crashing. Claire, succumbing to her injuries, is forgiven by Psycho and dies. Psycho laments to Prophet that he is powerless because he does not possess a Nanosuit. Prophet fights with Psycho, revealing that Rasch had incapacitated Prophet because of his integration with his suit, and that they only survived because of Psycho's humanity. Psycho, now going by his human name Michael, resolves to do the slaughtering and procures another VTOL to take the battle and Prophet to the Ceph.

Michael and Prophet kill the Alpha Ceph, destroying the wormhole device, but the beam powering the wormhole pulls Prophet into space. Now in orbit, Prophet sees a massive Ceph Ship, similar to the one in Lingshan, coming through the wormhole. His suit heavily damaged, Prophet almost gives up, but instead he pushes on. Recalling Archangel's immense power, Prophet hacks into the satellite and uses it to destroy the Ceph ship. This collapses the wormhole and ends the threat of invasion. In the explosion, Prophet is knocked off the satellite by debris and falls back to Earth. He impacts the water in Lingshan Island where 27 years ago the Ceph were initially discovered. When Prophet wakes up, he is in a house in Lingshan. In the background, there is a news broadcast of the now Senator Tara Strickland, who announces that the remaining assets of the C.E.L.L. corporation have been seized as part of the global recovery effort. The Nanosuit, now more symbiotic than ever before, changes its outer layer to resemble a human body, and restores the original face of Prophet, thus technically resurrecting him as he grabs the dog tags of his deceased Raptor Team squad members, thinking how much he sacrificed his humanity and his body in his quest for victory. He also marvels at how as a soldier, he was taught that the main thing he could rely on was himself rather than his equipment and that while he made mistakes, it proved that he was still human. He walks out to the beach, throws the tags into the water, and, deciding to use his actual name "Laurence Barnes" from now onwards, walks back from the beach towards and up the hill behind the beach-hut while cloaking, repeating his famous taglines "They called me Prophet. Remember me." Elsewhere, two frightened C.E.L.L. troopers and three frazzled men hurriedly retreat down a corridor. They are being attacked and pursued by an unknown enemy accompanied by strange sounds. It is revealed that the three men comprise the C.E.L.L. board of directors. A door closes without incident. The C.E.L.L. troopers turn around and are shot. The three nervous men turn to find Michael sitting at a desk. He claims to have had spent some time at one of their hospitals, and he wants to file a complaint.[2]

Crysis 3 has similar gameplay to the past games, with added elements such as hacking and the new Predator Bow. Fists also return from Crysis. The game is also much shorter than both main series installments. 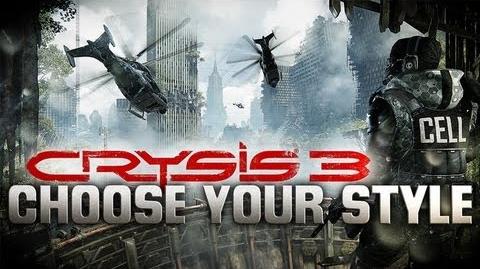 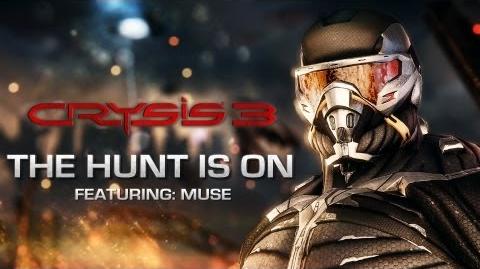 The Hunt is On With Crysis 3 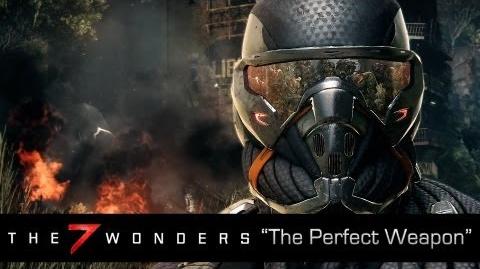 The 7 Wonders of Crysis 3 - Episode 5 "The Perfect Weapon" 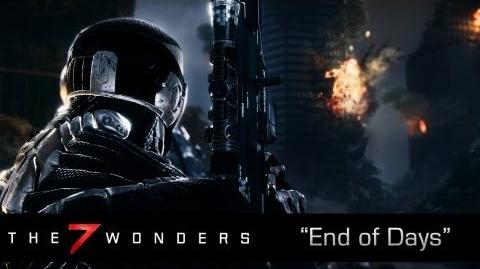 The 7 Wonders of Crysis 3 - Final Episode "End of Days" 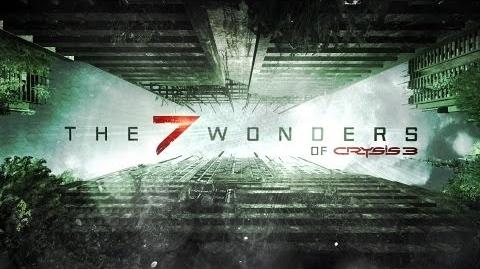 The 7 Wonders of Crysis 3 Teaser 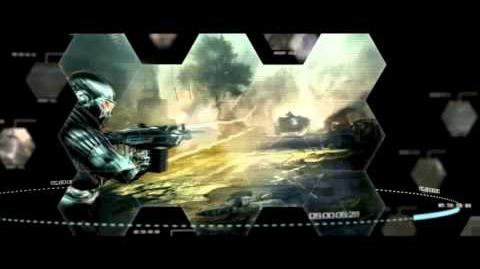 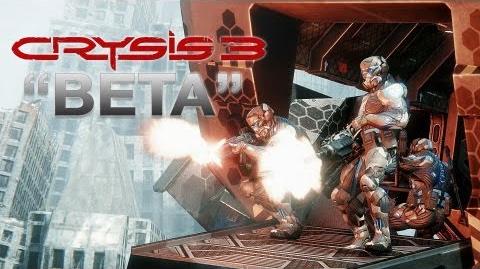 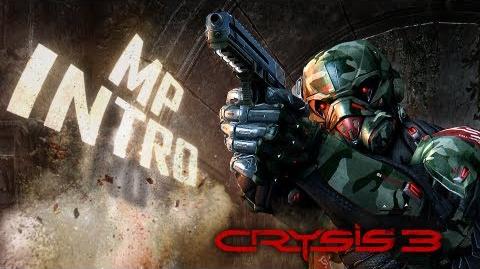