Crysis Remastered is a first-person shooter video game. It is the sixth game to be released in the Crysis series and is a remaster of the original Crysis, released in 2007.

First speculations about a new Crysis game/remaster started on August 29th, 2019 when Crytek released YouTube video titled: "CRYENGINE 5.6 Tech Trailer", showcasing CryENGINE 5.6. The video included clips of a tropical island rendered in CryENGINE 5.6 that at one point showed a bay with a hill in the background, strongly resembling the bay and hill seen in "Contact", the first mission of Crysis, in the "First Light" cut-scene. However, the first substantial hint at the game was seen on March 24th, 2020, in a YouTube video titled: "Never Stop Achieving - CRYENGINE Showcase 2020: Games of the Decade" released by the CRYENGINE channel. The video showcased footage that is believed to be of Crysis Remastered starting at 2:20. While visually similar to the original, the new game contains improved lighting, depth of field, and a slightly different SCAR model.

There are no observable changes to the level's layout. The next tease at the game happened on April 1st when after years of inactivity every Crysis social media account changed their profile picture to an image of the Nanosuit 1.0, possibly Nomad, sitting in a plane equipped with a parachute, presumably ready for deployment. A video version of this image with flickering lights was used on the official Crysis website, but has since been replaced with the announcement of Crysis Remastered. The next teases were two tweets by the official Crysis Twitter account: A "RECEIVING DATA" message as seen when Nanosuit 1.0 is booting up, hinting that upcoming game would indeed be a remaster of the original Crysis, and "Hey Nomad, you're still with us?" - a line said by Jester to Nomad, right before Raptor Team jumps out of the plane at the beginning of Crysis. The original line, however, says: "Hey Nomad, you still with us?". Why the tweet differs from the original line is unknown.

Tweets were tweeted out on April 13th and April 14th, respectively. Crysis Remastered was announced on April 16th, 2020, and is set to release on the following platforms: Microsoft Windows, Playstation 4, Xbox One, and Nintendo Switch. It is not known if there will be a separate release of the game for the Playstation 5 and Xbox Series X once they are released. According to Crytek's press release, the game will not contain multiplayer. The press release also stated that the game will focus on single-player "campaigns" - this vague wording was later clarified, and it was stated that the remaster will only include Crysis, not Crysis: Warhead, Crysis 2, or Crysis 3. When asked, one of Crytek's employees said that there will be "more info given out soon". 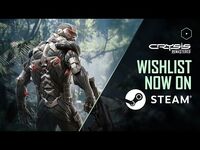 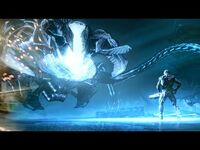