Crysis Warhead is a midquel in the Crysis series, taking place at the same time as Onslaught and onwards up to Ascension of the original game. The player plays as Sgt. Michael Sykes, better known as "Psycho," who assisted Nomad and fought in the Lingshan Island during the game Crysis. It is exclusive for PC.

While Crysis has been announced to become a trilogy, Warhead is not one of the major installments in the series.

Crysis Warhead takes place during the events of the original Crysis, on the other side of the island in which the game is set, after Psycho splits up with Nomad following their raid on the North Korean harbour. In the introductory film, British SAS Sergeant Michael "Psycho" Sykes witnesses a North Korean warship being bombarded by F-35 Lightning II U.S. Navy fighter jets. Leaving the shore, he joins a vehicle convoy driving through the jungle, and defends it as it is attacked by North Korean soldiers. The convoy is destroyed and the Marines fight into the night. The intro ends as the VTOL that tries to evacuate the destroyed convoy's Marines is hit by a missile and crash-lands. Psycho awakes and goes to find a better position for the surviving USMC Marines, but gets attacked by an EMP blast from a container being lifted away by a Mil Mi-24 North Korean helicopter. Sykes is later assigned a mission to pursue another North Korean container that JSOC believes contains a nuclear warhead. As the mission progresses, Psycho is reunited with old friend Sean O'Neill who was originally going to have Nomad's spot on Raptor Team. He was replaced by Nomad after failing an evaluation test. Psycho helps O'Neill after his F-36C jet is shot down and takes him to a VTOL to escape.

Psycho fights through the jungle and coastlines against the North Korean military to track down the container and stop them from taking it. After he reaches a cargo submarine, he sees what's inside. Rather than a nuclear warhead, the container houses a Ceph war machine, which knocks Psycho out with an EMP blast. After he wakes up again, he is captured and tortured by the North Koreans. As the submarine submerges, the island is suddenly flash-frozen while mechanical Ceph "Exosuits" attack. Psycho pursues Colonel Lee through the frozen waters and valleys, eventually meeting up with another nanosuit team on the island, Eagle Team. Psycho and Eagle Team continue the pursuit, fighting off an enormous walking Exosuit. Eagle Team is separated from Psycho in a mine, while Psycho continues searching for the container. After reaching an underground train station, Psycho is ordered to get on the train the container is loaded on. Emerging above ground, Psycho fights off both North Korean soldiers and Ceph forces trying to reclaim the container, O'Neill assisting him.

Psycho is ordered to destroy the container if he cannot capture it. Before the container can be extracted by friendly forces off the bridge where the train stopped, Colonel Lee arrives and uses a captured U.S. Marine as a hostage to bait Psycho off the train. The Marine begs Psycho to drop him so Psycho can retrieve the detonator and detonate the explosives. Colonel Lee manages to escape with the container before the explosives can be detonated. Although Psycho survives the fall, the marine, who was not wearing an armoured nanosuit, is not so lucky. He takes out his rage on an injured North Korean nanosuit soldier he pulled off the bridge with him, and drowns him in the river. Struck with grief for not saving the life of the Marine, Psycho has an emotional breakdown, but regains his composure in order to finish his mission.

Psycho assaults the North Korean-occupied airfield where the container is waiting to be taken off the island, taking out numerous ground forces and North Korean tanks. O'Neill returns in a VTOL, and assists Psycho in destroying an upgraded Exosuit walker by guiding him to a crashed U.S. Air Force cargo plane, which transported a powerful experimental weapon, the PAX (Plasma Accumulator Cannon), which allows him to fight off the initial wave of attackers. As the two are about to start extracting the container, Colonel Lee shows up again to reclaim the container, holding O'Neill at gunpoint. Lee tries to shoot O'Neill, but O'Neill is shielded by a cloaked Psycho, who begins fighting with Lee as O'Neill retakes control of the VTOL and takes the container. Psycho and Lee begin fighting inside of the VTOL, and Psycho gains the upper hand, knocking Lee out of the back onto the tarmac, leaving him to the mercy of a massive Ceph warship. O'Neill takes off with the container, as Psycho relaxes in the back.

Throughout the game, audio clips from four years before the game takes place are heard. These clips show brief glimpses into how O'Neill failed his evaluation test. The final clip reveals a brief conversation between Psycho and Nomad at the end of Nomad's own, successful evaluation. Psycho asks Nomad if he's okay, to which Nomad replies "Did you disarm the warhead?" Psycho does not reply to the question, instead saying "That's my Nomad - always putting the mission first."

Crysis Warhead is a standalone expansion pack for Crysis. It is priced at a modest $30 USD, even though it contains almost as much content as a full game.

The game is designed to be able to run on lower specs than Crysis.

Bunker doors are closed before Radio Call from Tower 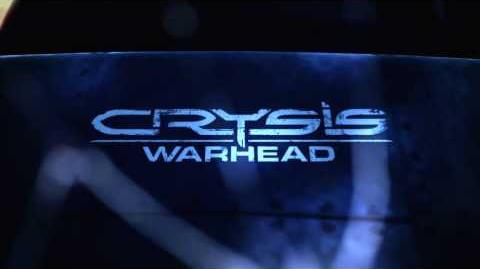 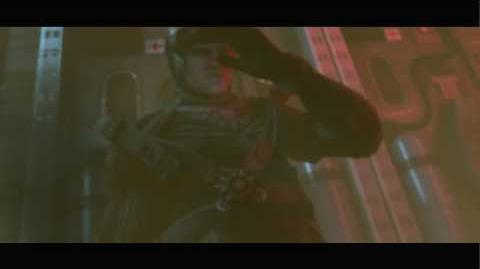 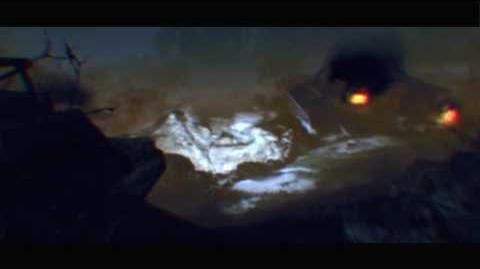 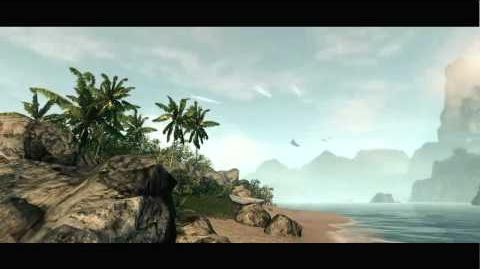 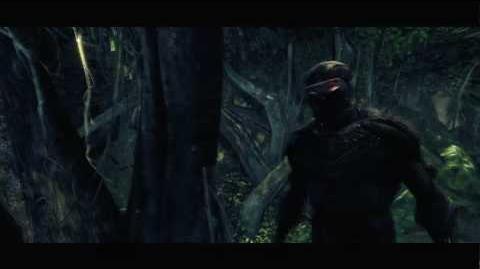 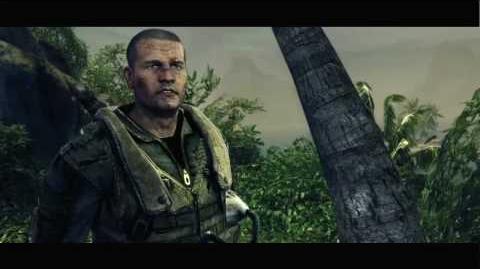 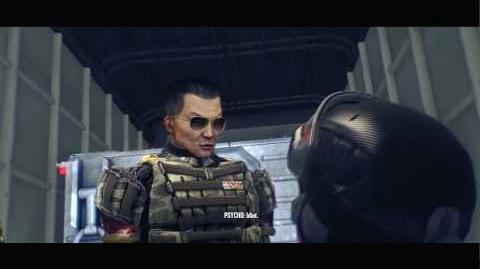 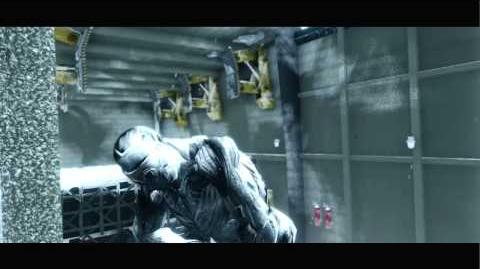 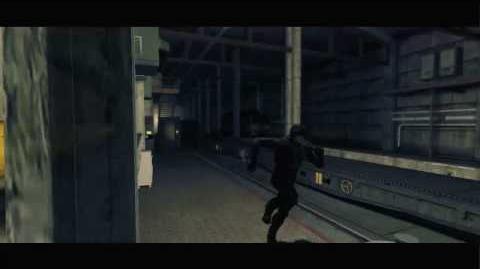 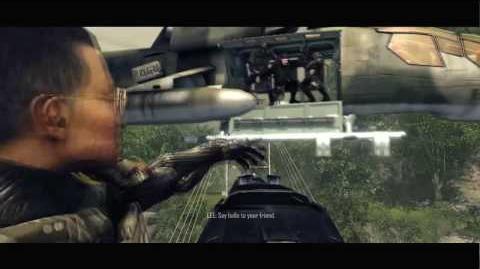 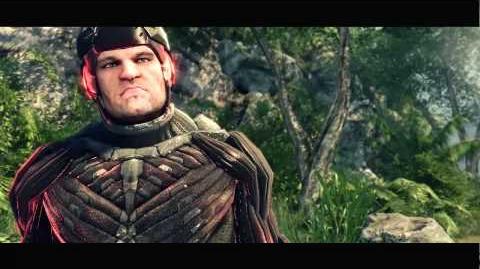 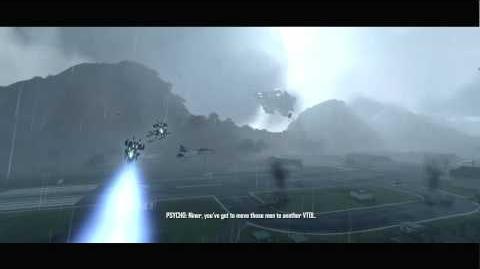 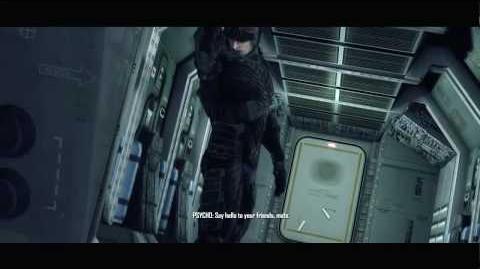