The FY71 is the primary weapon for KPA infantry and is the backbone of the NK military. It is the most common weapon in Crysis and Crysis Warhead, and is readily available starting from the level "Contact". It is available for multiplayer in Crysis 2 with the Decimation map pack. It once again appears in Crysis 3 both in the campaign and multiplayer, though it is rare to find one on the campaign.

The FY71 is chambered for the 5.45x39mm rifle cartridge and uses thirty-round magazines. One extra cartridge can be chambered for a maximum of 30 +1 rounds. A maximum of 331 rounds - eleven magazines plus 1 in the chamber - can be carried for this weapon. The FY71 is capable of both fully-automatic and semi-automatic fire and can mount an under-barrel attachment as well. This weapon is effective at most ranges and has a decent rate-of-fire and accuracy, making it a well-balanced rifle that is useful for most engagements. It was adopted by the North Korean People's Army in 2018, replacing the AKM as their standard weapon, making it the most readily available weapon in Crysis.

FY71 is one of the most abundant weapons in the series. Almost all KPA soldiers carry an FY71 making ammunition plentiful and readily available. The FY71 is also the single most customizable weapon available. It can be equipped with all attachments for the rifle, including the flashlight, silencer, laser aiming module, tactical attachment, incendiary ammo, under barrel grenade launcher, reflex sight, assault scope, and sniper scope. The FY71 has medium range and a moderate fire rate, and is essentially a jack-of-all-trades weapon.

The FY71 includes two colors, one is seen in Crysis, the color is completely black, in Crysis Warhead, is colored light green and black.

Incendiary rounds are a powerful upgrade to the normal rounds of the FY71. Each round creates a small explosion on impact, inflicting more damage than conventional rounds.

Compared to the SCAR, the FY71 is an inferior weapon because the FY71 holds less ammunition, does less damage, is less accurate, has a lower rate of fire, more recoil, and is louder. These disadvantages are somewhat countered by FY71's plentiful supply of ammunition. Midway into Crysis, flammable ammunition is made available for the FY71 through KPA equipment rooms (Though the Koreans are never seen using the ammunition), and is an enormous damage upgrade to the weapon. An FY71 chambered with incendiary ammunition will easily outclass the SCAR in every way but fully automatic fire.

The FY71 in the Crysis 2 multiplayer was made available for purchase via direct download with the Decimation map and weapons pack. At first glance the weapon appears to be less versatile than both the Scarab and SCAR, underclassing them in multiple areas, most notably accuracy, rate of fire, and range. The FY71 may therefore be considered a slow-firing, difficult to control, close combat weapon. However, the one advantage it holds over the other three assault rifles is its damage. The FY71 outputs considerably more damage than the other assault rifles, albeit at a slower pace than the SCAR, and much slower than the Scarab. Paired with the Aim Enhance module to compensate for the high spread and shot randomness, the FY71 is a very powerful gun in all areas except for rate of fire. Only in very long range (burst fire range) is the FY71 outclassed by the Grendel, and only in very close quarters (melee range) is the FY71 outclassed by the SCAR or Scarab due to their rate of fire. Pairing Point Fire Enhance with a laser pointer also greatly increases the FY71's accuracy.

Curiously, the weapon is significantly quieter than other weapons when firing, though not to the point of adding a Silencer.

The FY 71M Export Assault Rifle returns to Crysis 3 as the FY71M.

It can be found during the mission "Only Human" in a downed VTOL with a trapped resistance team.

The FY71 in Crysis 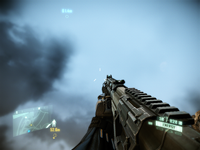 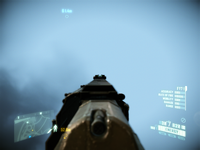 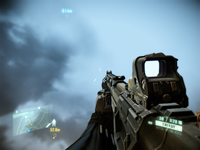 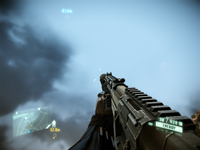 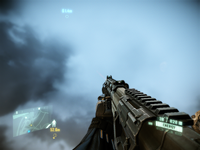 All the attachments for FY71 M