The Gauss rifle is a long-ranged weapon that appears in Crysis, Crysis Warhead, Crysis 2 and Crysis 3. In each new game different iterations of this gun appear.

The GK8 Gauss Gun is a new weapon designed by the United States. Unlike other weapons, it fires slugs of high-density alloys, such as tungsten carbide and depleted uranium, at velocities up to eight times the speed of sound.

It is primarily used by US soldiers, although members of the KPA are seen using captured Gauss Rifles in Crysis Warhead. It appears to be a bolt-action weapon, as the player tugs on a handle that is on the right side of the weapon between shots. Different iterations of this gun appears in all Crysis games.

The Gauss Rifle can be equipped with both Scopes, Reflex Sight, Flashlight and a Laser Pointer.

The player should prioritize targets so as not to waste ammunition. Generally, heavy infantry targets such as Nanosuit-equipped soldiers or aliens of any type should be primary targets for the gauss rifle. Lesser targets, such as generic KPA soldiers, should be dealt with using other weapons.

It is also very effective as an anti-Ceph weapon; it takes two to three shots to kill a Ceph Scout in Crysis and one shot to kill a Ceph Trooper. The Gauss Rifle should be equipped upon entering the Ceph-infested part of the game.

The Gauss Rifle is an excellent anti-materiel rifle that can disable hovercraft, boats, and other lightly armored vehicles, as well as heavy infantry. Its muzzle velocity is extremely high, ensuring no target can escape. It can kill an Ceph Trooper in one shot and an Ceph Scout in two shots (four in Warhead). It can kill a Nanosuit soldier with a single well placed headshot in Crysis Warhead.

The main downsides to the Gauss Rifle are the small magazine size and scarcity of ammunition. Rounds fired from the Gauss Rifle leave blue trails behind, which can reveal the user's position. It is the second most rare gun in Crysis as well as Crysis Warhead, and is only used by a handful of U.S. Marines; some captured rifles are used by KPA Nanosuit soldier in Crysis Warhead.

"The much beloved Gauss rifle in its second generation form with more power and less recoil, improved in all the ways that matter. This electro-magnetic rifle will provide Snipers with the sheer power needed to get the job done."
―In-game description

Following the successful, albeit controversial, trials at Lingshan, CryNet accelerated development and within three years the M2014 became standard issue for the elite ranks of CELL security forces. CryNet spokesman Elliot Schwarz sees the Gauss as a breakthrough in modern battlefield technology, “The M2014 is a ‘game changer’ that will take us through the unique challenges of the next decade”.[1]

In Multiplayer, the player unlocks a C.E.L.L. camouflage for the M2014 Gauss Rifle after the fourth Reboot.

Like the Gauss rifle of the original Crysis and Crysis Warhead, ammunition for the M2014 is scarce, but it is a very powerful weapon. Ceph Devastator units can be easily defeated within three or four shots. It is essentially a one shot kill against humans and even Ceph Stalkers and Grunts.

The Gauss Rifle returns in Crysis 3 as Gauss Sabot Gun. It has a lower rate of fire compared to M2014 Gauss of Crysis 2. This weapon usually kills ordinary combatants in a single hit, while Ceph Devastators can be killed with two to three headshots. It also possesses the ability to penetrate some forms of light cover. Almost every type of enemy in the game can be easily taken down by this weapon, making it one of the most useful weapons in the game when it is available. It is still eclipsed by the Bolt Sniper for being the most effective sniping weapon in the game. 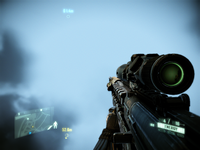 The M2014 Gauss Rifle in Crysis 2 with Sniper Scope 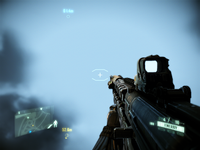 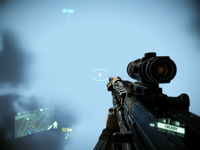