The Gravity Bomb Launcher is the only weapon used by Orange Scouts. It appears in Crysis Warhead.

The firing mechanism is not seen, but the bombs are situated on the sholders of the Orange Scout. They resemble an orange about half the size of a human. The bombs are launched when the Scout comes near the player or it is killed. It inflicts serious damage and sometimes even kills a Nanosuit soldier with a single blast.

The Gravity Bombs are destroyable and explode when shot but the player has to get to a distance, or he will be killed by the explosion. The bombs are slow and can be easily dodged by sprinting in Speed Mode. The Scout can be killed before reaching the player, causing the bombs to be launched far from the player. 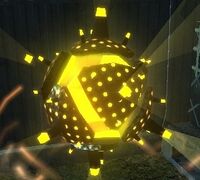 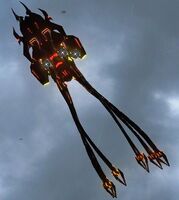