"Burst firing its way into the Crysis universe, the Grendel is an assault rifle that packs a 3-shot punch you don't want to be standing in front of. Whether you want to get into the thick of it with burst fire or if you wish to sit back and pick off your enemies in semi-auto mode, the Grendel offers a variety of combat capabilities to suit almost any situation."
―In-game description

The Grendel is a burst-fire rifle featured in Crysis 2 and Crysis 3.

The Grendel, as its name suggests, is a heavy caliber battle rifle with immense stopping power. Developed by Ukrainian giants Lisunov Arms, the Grendel is the rifle of choice for a designated marksman to boost their effective range and destructive power. It features both semi and burst-fire modes, and its flexible design allows for easy customization to provide both short and ranged combat options.

This versatility combined with its devastating power and pierceability make it perfect for assaulting heavily armored units and enemies behind cover. To add insult to injury, the 6.8mm hollow-point rounds are designed to maximize tissue damage and blood loss, ensuring efficient lethality upon impact.

In recent years the Grendel has been widely adopted by USMC forces, routinely issued alongside the SCAR to provide a greater punch and stopping power over distance.[1]

Grendels are ideal as a marksman rifle at medium to long ranges in semi-auto fire, where their high firepower more than offsets the slight increase in recoil. Burst fire is powerful at close range, but the lack of full auto fire, the limited fire speed between bursts, and the small magazine can make the user more vulnerable up close than if they were to use weapons such as the SCAR or SCARAB. The Grendel is capable of mounting a wide range of accessories just like its assault rifle counterparts, being configurable for almost any situation, though it cannot mount a silencer (except in multiplayer).

The Grendel always provides a 15% Armor Mode efficiency reduction, much like the Majestic and Hammer. This means that an Armored target will take 80% damage from the Grendel, rather than 65%.

Grendels are particularly useful as all-range weapons against Ceph Troopers and a better option against Ceph in general due to the heightened armor of Ceph units. It first appears next to an ammo cache in a room underneath the elevated roadway on the way to the underground parking garage in the mission "Unsafe Haven".

Grendel has higher firepower and penetration but less accurate and higher recoil than SCAR, making it more effective for engaging Ceph rather than CELL, as Ceph has higher defense but (usually) less accurate while firing than CELL. As Grendel has high recoil, attaching Assault Scope or Sniper Scope with burst fire mode is not recommended, use semi-auto instead. In Crysis 3, using Match Barrel is recommended, due to the poor accuracy. Use Foregrip to help improve the stability in burst fire mode. 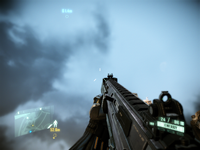 The Grendel in Crysis 2 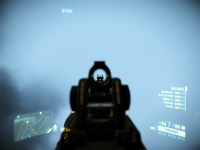 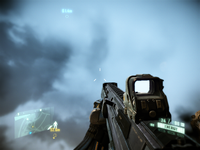 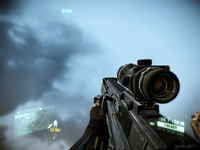 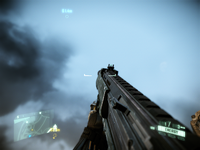 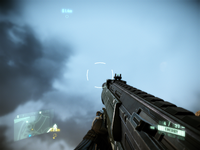