HMLTV-998 Bulldogs, usually referred to as Bulldogs or LTVs, are the primary ground-based vehicle used by both the KPA and US forces during the events of Crysis and Crysis Warhead.

LTVs largely resemble HMMWVs with mounted turrets. KPA LTVs have tan tiger-stripe camouflage while U.S LTVs have a green woodland camouflage. Some LTVs have a tarp covering the back passengers while others do not.

LTVs return in Crysis 2, this time used by the United States Marine Corps and C.E.L.L. LTVs are also present in Crysis 3, this time only used by the C.E.L.L. But wreckage of Marine LTVs can be found floating around the Liberty Dome.

The gunner fires a mounted Shi Ten machine gun. The machine gun is fairly accurate if fired in short bursts; single shots also work as well. Firing full auto is inadvisable for dealing with long range targets due to the rather quick overheat time and the extremely long cooldown period. While the vehicle is in motion, it is highly inaccurate.

In Crysis 2 and 3, the LTV is equipped with a HMG, therefore giving it a very accurate and powerful armament, but with limited ammunition thus restricting its usefulness.

The LTV is very fast, allowing the player to go from place to place faster. Its mounted machine gun can mow down enemies very quickly.

The LTV has no protection for the passengers, leaving them vulnerable to gunfire. The LTV can easily be destroyed if the fuel tank mounted on the back is hit by gunfire, and its speed can sometimes make it difficult to control. It is also very fragile as compared to tanks , APCs and IFVs, so great caution must be noted when involved in situations with these kinds of enemy vehicles.

In singleplayer, enemy patrol groups often use LTVs to navigate along roads and to reinforce allies under attack. LTVs typically sustain speeds of around 40 mph (65 km/h), but when combined with the NOS booster can reach into the 60's. 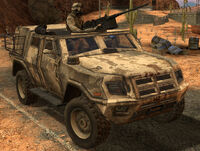 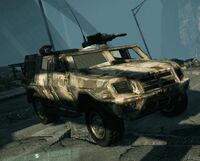