"Don't let its size deceive you, this .50 caliber pistol is definitely the kind of 'last resort' that you want to have at your disposal if you find yourself out of ammunition or fumbling around with a reload on your main weapon."
―In-game description

The Hammer is a high-caliber pistol featured in Crysis 2. It is seen in the hands of C.E.L.L. officers. The Hammer also reappears in Crysis 3 as the Hammer II.

In Multiplayer, the player will unlock a C.E.L.L. camouflage for the Hammer after the first Reboot.

The latest in high-caliber handguns, Ukrainian Lisunov Arms have unleashed a true beast with their new Hammer pistol. Designed for the heavy hitting .50 cal Compact round, the Hammer boasts unrivaled stopping power for its class, capable of piercing spider silk body armor with just a few shots.

Insufficient for military usage as a sidearm, due to its low magazine size and high recoil, the weapon is nonetheless popular with bodyguard services and other private contractors around the globe, where instant stopping power counts more than ammo capacity.

Recently, rumors emerged that mega corporation CryNet have secured a lucrative contract with Lisunov to equip their private sector C.E.L.L. security forces with Hammer pistols, despite concerns from civil rights lawyers that the weapon would be overkill in the hands of law enforcement. CryNet were unavailable for comment on the matter.[1]

The Hammer returns to Crysis 3 as the Hammer II, one of the first weapons you are given to by Michael Sykes in the first level. It has high damage, a good round capacity and can be equipped with a suppressor. 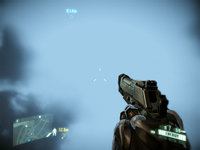 The Hammer in Crysis 2 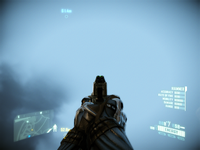 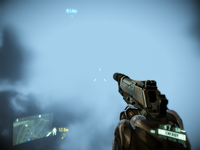 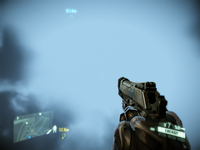