Hovercrafts are vehicles that can travel on both land and water.

Hovercrafts do not resemble any other vehicle in the game and so are easy to spot. They have no wheels and no motor. Instead, they have large thrusters on the back and a black rubber-like bottom.

The only weapon a hovercraft has is a machine gun controlled by the driver. In Crysis Warhead, the hovercraft in singleplayer is unarmed, and looks different.

The Hovercraft moves faster than any of the standard boats in the game and allows quicker transportation and to be able to evade the missiles and auto cannons of the automated turrets as long as you keep moving. It's amphibious capabilities allows it to be used on land. The Hovercraft also sports a mounted machine gun which can be controlled by the driver and can function as a light infantry support vehicle.

The Hovercraft is bulky and its high speed makes it difficult to control while on land. In the multiplayer and the singleplayer modes of Crysis Warhead, it is unarmed, making the operator utterly defenseless against any attack.

Hovercrafts tend to deflate while unused, meaning that exiting a hovercraft while over water would cause it to deflate and sink.

Hovercrafts are only featured in the singleplayer modes of Crysis and Crysis Warhead. In multiplayer, they are available for both the US and KPA in Power Struggle maps.

Hovercrafts glide easily over both water and land. They quickly build up speed to almost 60 mph (97 km/h) and nearly 70 (113 km/h) with the booster. They are moderately armored, but lack decent firepower and are not meant for combat. Rather, they should be used for rapid amphibious transportation and ferry.

Bigger versions which can carry more infantry and even vehicles, can also be seen in the beaches of Second Chance and the cutscenes of Crysis 2, though they are unusable. 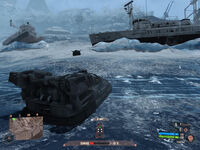 Hovercraft in the game
Community content is available under CC-BY-SA unless otherwise noted.
Advertisement