Incinerator is a superheated plasma weapon that is featured in Crysis 3. It is dropped by Ceph Scorcher.

This weapon is used by Scorchers; Ceph robots which are used in urban warfare. Its range is very limited and as such it can only be used for close-combat purposes.

It rapidly fires a stream of plasma fireballs in a steep arc, which limits its effective range. The fireballs will burn out quickly, restricting the range of the weapon further. It is the Ceph analogue to a conventional flamethrower. These rounds do very heavy damage against most targets requiring only one or two hits to kill most regular enemies, and can even damage Scorchers themselves. Additionally, shots will burn for a short period after hitting the ground, which can cause some damage to enemies that try to walk through the flames. It is an ideal weapon for suppressing and killing any target that gets within its small range, and generally useless otherwise.

Prophet rips it from a Scorcher, as seen in the 4th episode of "7 wonders of Crysis". He uses it then against Ceph, who are burned rather quickly. Like the Reaper Cannon, the X-PAC mortar, the Pinch Rifle and the Bolt Sniper the Incinerator will reduce the player's field of view.

It seems that the Incineratior is very effective against the Ceph and C.E.L.L at the same time. The magazine also is apparently very large, but the range has definite limitations.

If you don't have any electric bolts from the Predator Bow or a K-Volt, Scorchers can still be overloaded by hacking them.

Pick-up icon for the Incinerator. 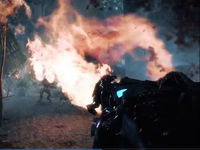