"Major Laurence Barnes... The Prophet. Karl Ernst Rasch, at your service"
―Rasch introduces himself to Prophet at the beginning of "The Root of All Evil" in Crysis 3

In 1919, Rasch led a scientific expedition to the Tunguska crash site with his business partner Jacob Hargreave and their colleague Walter Gould, where Rasch presumably helped Hargreave steal Ceph alien technology. Through unknown circumstances, Rasch and his two colleagues were the only survivors of the expedition, in which Rasch and Gould were severely weakened and were carried to safety by Hargreave before being rescued by members of the British expeditionary force operating from Vladivostok.

Sometime later, Rasch and Hargreave founded Hargreave-Rasch Biomedical and its subsidiary, CryNet Systems, to develop anti-alien technology. According to Hargreave, Rasch refused to use the technology to artificially extend his life, and so he would presumably be dead by 2023. However, after the events of Crysis 2 when the Ceph were repelled from New York City, Rasch shows up in a CELL helicopter and contacts Alcatraz, revealing that he is still alive.

When CELL used the captured Alpha Ceph as power source, becoming a tyrannical power, Rasch attempted to stop them, but was thrown out of the company, so he created the underground Resistance fighting against C.E.L.L. In 2034, he was in Yonkers, leading a cell of resistance fighters preparing to assault the NYC Liberty Dome. Then, the captain of the british nave HMS Robin Hood, Cyrus Harper, arrived, offering to change sides. Rasch explained him his history and agreed, sending the Nanosuit soldier Dane onboard. Soon after, CELL destroyed the british ship and launched a total assault against the Resistance, decimating them. However, somehow, Rasch escaped.

Rasch is introduced in the third game as the leader of the Resistance against C.E.L.L. in New York, providing support and knowledge to its field commanders, such as Claire Fontanelli. During their encounter at the temporary resistance safehouse, Rasch and Prophet share a moment of distrust, as Prophet's suit fails to get a read on him (the suit classifies Rasch as an anomaly). Rasch claims it's not possible for the suit to get a read on him as he is one of the creators of the suit. Rasch also seems to assert importance to Prophet's alliance with the resistance, saying that he could be their "game changer". However, at the same time, he claims that Claire is right about the amount of risk involved in housing and assisting Prophet, given the fact that he is extremely volatile and powerful. He then sends Prophet and Psycho off to destroy CELL's power source. When Prophet reaches the Nexus building and deactivates the defense system in an attempt to kill the power, Rasch thanks Prophet, adding that "today is the day we get our freedom back from CELL".

Later on, when Psycho and Prophet head to the skinning labs, Rasch goes AWOL, while Claire and the rest of the resistance struggle to get intel about Archangel. As everyone rushes to disable Archangel, Psycho and Claire find Rasch in a state of confusion. He watches the Archangel satellite fire a 5% charge at New York, and then goes on to speak out of character. He thanks the trio for shutting down Archangel, saying "my children slept mindless while CELL had me in their prison". He then acknowledges the third and final stage of the Ceph colonization strategy, as the CELL system plays a video explaining it.

Prophet goes on to deduce that Rasch used nanotechnology to prolong his life, which exposed him to Ceph influence. Rasch is revealed to have been a puppet of the Alpha Ceph the whole time, thus explaining his unusual behavior and the scanner block on Prophet's nanosuit. Rasch then lets out a powerful beam of energy which immobilizes Prophet and causes damage. Psycho tries to save the pinned down Nanosuit soldier, as Claire jumps between him and Rasch's energy beam. Claire ends up being mortally wounded, but Psycho manages to shoot Rasch and frees him of Ceph influence along with Prophet's help. Psycho and Claire head for the VTOL, as Rasch, now free of influence, tells Prophet that he has something which the Ceph will never have or understand. The angry Alpha Ceph re-emerges from the bottom of the tower to kill Rasch for his failure. Rasch buys Prophet and the team time to escape before being killed by the Alpha Ceph.

"Am I reaching the Force Recon Marine just recovered in Central Park? The wearer of Jacob Hargreave's nanoshell? Ah, wait, I'm adjusting the feed ... ah! Better! Ahm, allow me to introduce myself: Karl Ernst Rasch, at your service. And you are...?"
―Rasch introduces himself to Alcatraz after "A Walk in the Park" in Crysis 2

"You sound quite... prophetic. Is that intentional?"
―Rasch remarking on Prophet seeing visions about Ceph ending the world in "The Root of All Evil"

"You have something Prophet ... something the Ceph will never have or understand"
―Rasch encouraging Prophet to destroy the Ceph spaceship coming through the Einstein-Rosen Bridge.

Rasch as he appears in Crysis 3 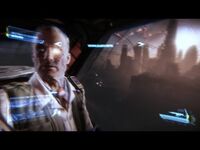 Rasch after Ceph take control of him 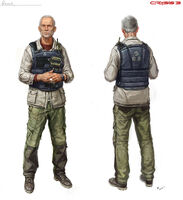 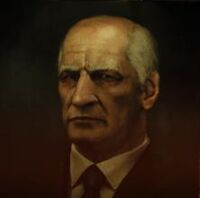 A portrait of Rasch in Crysis 2