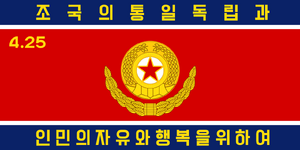 The Korean People's Army (KPA), also known as the Inmin Gun, comprises the military forces of North Korea. They are the main enemies in the games Crysis and Crysis Warhead.

The KPA started out as the Korean's Volunteer Army at Yan'an, China in 1932 for a future, independent Korea. During the Soviet occupation of Korea, the Soviet 25th Army ordered all armed resistance in the northern region of the peninsula to be disbanded. With permission from the Soviet Union, North Korea founded the State Security Department and the KPA in 1948 and was the main instigator of the Korean War (called the "Fatherland Liberation War" in North Korea). After the Korean War ended, tensions began to increase between North and South Korea and by the 21st century, North Korea began to have nuclear to biological weapons capability.

The KPA were dispatched by the North Korean government to secure a Ceph artifact found in the Lingshan Islands that was found by a CIA-tracked research team, under the command of General Kyong. They took control of the island, evacuated its population, and held the research team on the island hostage and coerced them into activating the artifact. Archaeologist Dr. David Rosenthal, however, was able to send out a distress call to the outside world, which gained the United States' attention. Subsequently the KPA comes into military contact with the U.S. military and the nanosuit wearers, Raptor Team. Ultimately, the KPA discovered the existence of a Ceph megastructure inside an island's mountain in which General Kyong managed to open the structure and inadvertently unleashing the Ceph.

As a result from Kyong's actions, nearly all KPA troops have been wiped out from the freezing temperatures of the ice sphere created by the Ceph or fled (except the nanosuit soldiers).

The KPA under the command of Colonel Lee managed to capture a Ceph war machine and planned to extradite it from the island via submarine. Unfortunately, the extradition was hindered by the Ceph's awakening. The surviving KPA forces that didn't freeze transported the war machine to an underground train station to be sent to a North Korean-occupied airfield, in order to be flown off the island. Raptor Team member Psycho stopped the extradition and defeated Colonel Lee, which results in him taking the war machine to the USS Constitution.

KPA troops are mainly armed with FY71, submachine guns and shotguns. However, there are special variants of KPA troopers that use DSG-1, LAW missile launchers, and miniguns.

In Crysis, most KPA troops have no armor and can be easily killed. Later on, however, they wear bullet-proof vests and other armors such as a helmet. They wear differently colored camouflage even though they are all operating in the same type of environment. Occasionally, you might see some with foliage attached to their armor to better conceal themselves in dense forests. It is widely, but not completely, limited to snipers. The KPA's special ops soldiers who are equipped with denser kevlar and lastly the KPA's elite Nanosuit Supersoldiers are equipped with Nanosuits which are similar in operation to the American versions, they possess the highest armor of all the KPA, second only to General Kyong and Colonel Lee.

All KPA soldiers come in two variations: Heavy and Light. Light troopers wear little to no body armor, and either have bare heads or cloth hats, while heavy troopers wear full kevlar vests and helmets as well as ceramic plating on their torsos and shoulders. Body armor reduces the damage enemies take from torso shots down to 75% (whereas unarmored enemies take 120% damage when shot in the torso). Most KPA soldiers have 180 health, while squad leaders have 250. So, for example, as the SCAR assault rifle deals 120 damage by default before damage falloff begins at 50 meters, light KPA soldiers will always die in one or two shots to the torso, while heavy soldiers will take 120 x 0.75 = 90 damage per shot to the torso with a damage drop of 0.1 per meter after 50 meters, enabling them to absorb two or three rounds before dying at <50 meters or three or four rounds at 51 to 300 meters. Meanwhile, a head shot from any weapon except the Pistol or AY-69 kill any KPA soldier except Nanosuit users in one hit, regardless of whether or not they're wearing a helmet.

The damage that soldiers receive further depend on where they're being shot:

The Campers are more of a defensive and aggressive AI. Instead of attacking the player, they would retreat to a more entrenched and secure area and defend from there. They will only move once the area is secure or they need a better position to take cover in. Unlike the other variants, the Campers have much more armor in the front, making one shots kills to the chest highly unlikely, especially with high-powered weapons.

Cover troopers are more of an advancing AI, moving from cover to cover and putting suppressing fire on the player until the player returns fire. They are also the most commonly encountered enemy in the game and are the first type of enemy you will encounter in the game.

Flankers are a more swift and stealthy type of soldier. They would instead try to flank you and attempt to ambush you. They accomplish this by relying on their mobility, the environment, and various objects in the battlefield to achieve the element of surprise. They do not assist in suppressing fire or cover fire, preferring to circle around and fire at the player from behind. They are very lightly armored and do not have shoulder pads. They can be easily identified by their booonie hats.

Leader soldiers are rarer class of infantry. They are generally squad leaders of other soldiers, they will usually command other soldiers. Their A.I. are combination of Cover and Camper, so use the tactics against both Cover and Camper effectively. They tend to be more like Cover rather than Camper. Soldiers of this A.I. are squad leaders. They look different from the others and are also tougher than other infantry, with the health of 250. They are harder to kill, especially with armor. Killing them will easily demoralize and psychologically affect the bearing and performance of the KPA soldiers. They can be easily identified by their maroon

The snipers are basically light cover and flanker troopers carry sniper rifles. They are usually seen in watchtowers, on the roof of buildings, and on several high cliffs and edges. They are usually sneaky and extremely skilled in marksmanship, being able to cut down the health of the player in two shots (three if the player has Armor mode on). When engaging in CQB, they will typically draw out pistols and/or resort to using their sniper rifles as a desperate attempt to defending themselves.

These types of light cover AI are seen piloting helicopters and driving tanks. They pose a very serious threat as the vehicles they use may have deadly weapons or may be capable of hindering the player's progress.

"Elite" variants in-game serve as the primary special forces operatives of the KPA. They can be distinguished by their all-black attire. They often are equipped with silenced weapons (with the exception of the shotgun) with laser modules and optical sights attached to them, which gives them the ability to more accurately lay down silenced fire on you at range. In addition, they're capable of throwing smoke grenades and flashbangs to disorientate or distract the player, which gives them the ability to ambush and overwhelm the player if not carefully dealt with. They also generally sport more armor than their regular counterparts, making them more likely to survive hits from high damage weapons such as the DSG-1.

General Kyong and his elite personal guard, as well as Colonel Lee, use nanosuits similar to the ones used by Raptor Team. However, these models seem to be weaker than the American "originals"; Nomad commented that they seem like "cheap knock-offs." However, these nanosuit soldiers are still dangerous, so deal with them with caution. They are the only KPA units that can use the Minigun. In Crysis Warhead, they are typically armed with Sub Machinegun, Precision Rifle and Gauss Rifle (captured from USS Maine).

The Koreans are much weaker than the Marines, have poor combat strategies in some situations (such as retreating from snipers), and wield less-accurate weapons. They would often cower if their team leaders are down and blind-fire as a last resort. They can be killed by any weapon in the game and by various objects found in the game. Unlike the Marines, they are unable to defeat any of the alien units in the game and can only defeat difficult enemies if they outnumber them or wield nanosuits.

The nanosuit variants, unlike the regular KPA soldiers, use much more stealthy tactics. When encountering an enemy, they would usually cloak and make quick, abrupt attacks or attack in strength mode if the enemy is close to them. Depending on the situation, they would often hide in cloak mode until they are ready to attack, making them difficult to take down. The Nanosuit soldiers that wield miniguns are much more aggressive, camp in their spot, and continuously fire their minigun before advancing.

Compared to the C.E.L.L. troopers encountered in Crysis 2 and Crysis 3, they are much more organized, challenging, and tactically proficient in combat. One example is that the KPA infantry do not abuse explosive weaponry and only resort to the latter when encountering heavy vehicles or heavy resistance. Another example is that they tend to be more aggressive when dealing with clocked enemies. This is because they are able to determine the source of the cloaked enemies' movements by hearing and wildly fire at the last known location of the cloaked enemy and throw smoke and flash grenades as an attempt to disorientate the enemy.