"Lab Rat" is the fifth mission of Crysis 2.

Alcatraz arrives at Harbor Lights Pier where Gould's lab is located, but finds that C.E.L.L. has discovered it first and that Gould himself has moved to an apartment nearby. Gould instructs Alcatraz to break into the lab and destroy his computer, which contains the location of the apartment. He navigates the C.E.L.L. infested pier and enters the warehouse in which Gould stationed his lab. Reaching the lab, Alcatraz kills 3 C.E.L.L. soldiers that are trying to find info about Gould and destroys the computer which contains the data. Lockhart then suddenly orders masses of C.E.L.L. operatives as well as a Gunship to swarm the building in an attempt to kill Alcatraz. Alcatraz fights off the soldiers and destroys the Gunship, which crashes through the wall allowing Alcatraz to proceed. Gould tells him to come at the apartment,which Alcatraz successfully does.

Inside the apartment Gould explains about some basic functions of the Nanosuit and instructs Alcatraz to sit down in a Nanosuit cradle. Before starting the scan he tells Alcatraz (who he thinks is Prophet) about Tara Strickland - daughter of Major Strickland. After starting the scan, Gould finds out that Alcatraz is not Prophet and interrogates him about who he is. The Nanosuit unzips the memory that is seen at the start of Second Chance. Gould, losing hope, explains the Ceph and gives a more in depth information about the Nanosuit and Jacob Hargreave. They discover a Viral Sub-Routine in the Nanosuit's deep layers. Gould now understands that Prophet wanted Alcatraz for a purpose. With his hope renewed, Gould informs Alcatraz that they must reach the Hargreave-Rasch Biomedical Corporation to get a Nanosuit Deep Scan Cradle.

The apartment is suddenly attacked by a C.E.L.L. Sniper and several soldiers who use tear gas to lure Gould and Alcatraz out. Gould runs out via the fire escape, while Alcatraz fights the soldiers inside the budling. After fighting off several soldiers, Alcatraz reaches a window where he is attacked by a C.E.L.L. soldier; Alcatraz pulls himself and the soldier out of the window, sending both of them plummeting to the ground. After a brief fight in the air Alcatraz gains the upper hand and uses Armor Mode and the soldier as a cushion, landing on a metal container and barely surviving. 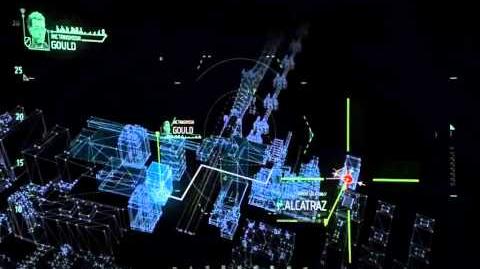