The M12 Nova is a semi-automatic pistol in Crysis 2 and Crysis 3. It holds 20 rounds per magazine and up to 120 in reserve, giving it a total of 140 rounds. The gun has moderately low damage compared to the other pistols in the game but has a faster fire rate. The M12 Nova has the second fastest rate of fire out of the four handguns in Crysis 2 (The first being the AY69). The M12 Nova trades off damage per shot for a bigger magazine.

The M12 Nova can attach the Laser Pointer and the Silencer.

The Silencer allows the M12 Nova to be fired in cloaked mode for a cost of ten energy points, allowing the player to traverse missions stealthily and easily dispatch human enemy soldiers unnoticed in Crysis 2 singleplayer.

The player starts off with the M12 Nova unlocked, but without any attachments. The M12 Nova is recommended, especially since it possesses a high rate of fire and a larger magazine, instead of the Hammer or Majestic that are generally slower, require accuracy, and have low count magazines. Compensating for abnormally large amounts of latency and less than desirable hit detection residing in Crysis 2, it is much more desirable for a new player to get used to the high rate of fire and low damage rather than the low rate of fire and low magazine capacities of the other pistols. 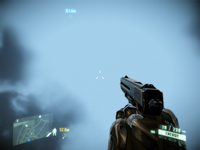 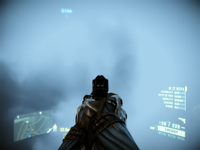 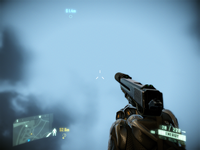 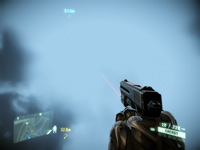