The M84 flashbang is a weapon featured in the Crysis series. Upon detonation, the grenade will temporarily blind and deafen anyone within its effective radius, effectively burning an image into their vision, causing disorientation. While the M84 is an American design, it is only seen used by the KPA during Crysis and Crysis Warhead. In Crysis 2, it is only seen in multiplayer.

The flashbang is most effective in close-quarters battles. In tight areas such as buildings or jungles, the player may throw the flashbang from behind cover, disorienting nearby enemies without affecting themselves. The player can then emerge from cover to take down the stunned enemies without resistance. This tactic is particularly effective with asilenced weapon.

The flashbang loses its effectiveness out in the open, where targets will often be widely dispersed. In such environments, a Smoke Grenade would be more effective at concealing the player's movements.

Another effective use of the flashbang is creating a diversion, although the smoke grenade is more effective at this. If the player is compromised and there are multiple enemy forces nearby, an effective way to evade them is by throwing a flashbang to disperse or stun an entire group or draw away nearby enemies. Then, the player can take advantage of the dispersion and chaos and retreat to somewhere secure until they are ready to move or strike. 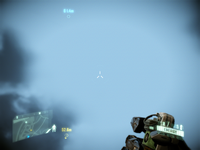 The Flashbang in Crysis 2
Deutsch
Community content is available under CC-BY-SA unless otherwise noted.
Advertisement