"Bringing the law into your own hands is an easy task with the power of Crysis 2's pump-action 'Marshall' shotgun. Perfect for tight areas and close-quarters-combat, utilizing the Marshall as your primary weapon, the thundering boom from each shell deployed will be sure to send your foes running"
―In-game description

The Marshall is a shotgun appearing in Crysis 2.

The Marshall is the latest combat shotgun model from the famous Italy-based manufacturer Corbetta Firearms. Crafted around a durable polymer frame and fitted with a retractable stock, the weapon resembles combat-proven, state-of-the-art technology used by law enforcement, military police and the private security sector for several years.

With its high capacity internal magazine, the Marshall can hold a large amount of shells, addressing concerns over limited ammo capacity in previous models. The additional rail mount options provide a new level of adaptation, which enables rapid customization in the field. When using the latest 12 gauge ammunition types, it is even possible to attach compact silencers for covert tactical entry operations.

Like its predecessors, the Marshall provides excellent short-range stopping power against all but the most heavily armored targets, making it an essential piece of equipment for riot-control and urban combat operations.[1]

The Marshall is more powerful than the Jackal at close range, but at short-medium range, it is outclassed by the Jackal because of the Jackal's higher rate of fire. The Jackal can therefore be considered as the more versatile shotgun, because it can shoot quickly and has a longer range and faster rate of fire. However, the Marshall can attach a suppressor, making it a good shotgun for stealth-based combat. The suppression does reduce damage over range, but shotguns are usually not used beyond close range. In campaign, they can kill C.E.L.L. operatives in one blast at close range, but Ceph can take several rounds of shot if the dispersals are not placed at weak points. 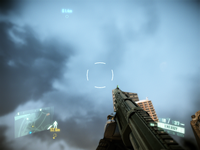 The Marshall in Crysis 2 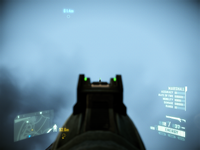 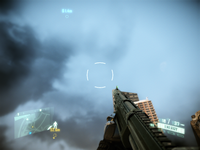