"I'm British, you muppet!"
―Psycho to a KPA Soldier and later Colonel Lee, when they cursed him for the American incursion. Possibly his most well known quote in the entire series.

Sergeant Michael "Psycho" Sykes is a former British Special Air Services (SAS) operative. He has since joined the U.S. Army Delta Force and is the third-ranking member of Raptor Team, behind Laurence Barnes and Jake Dunn.

Before joining the Raptor Team, Psycho was in the SAS for a couple of years and was selected to join the Raptor Team based on his history as an SAS operative.

At the start of the game, he comes along with the Raptor Team, makes his jump out of the plane and presumably lands close to Prophet. He is seen in-game during the investigation of a frozen boat along with the rest of the team and helps Nomad until the mission at the harbor is over. After that he's ordered to follow another marine company (Alpha Company).

At the end of the game, he pilots a VTOL carrying Nomad and Helena Rosenthal on a course back to the Lingshan Islands in response to a transmission from Prophet.

Psycho is the protagonist and main character in Crysis Warhead. His journey starts when the cruiser in Hongzoo Harbor is destroyed by US air strikes. He joins the Alpha Company, jumps into a convoy and defends it until it is destroyed. Afterwards he and the rest of the company enter a VTOL and fly out to another part of the island. The VTOL is shot down, forcing Alpha Company and Psycho to find a safe checkpoint. Psycho encounters a helicopter with a container after an EMP explosion that knocks him out. After awakening, Psycho fights his way through a beach, hotel and helps his friend Sean O'Neill and some marines in his path. Later he attacks another harbor controlled by the KPA, but is captured and tortured by a high-ranking KPA commander, Colonel Lee, who's also wearing a Nanosuit. The submarine they are on board freezes later, inside the Ice Sphere, and Psycho pursues Lee (and the container) with a hovercraft. After a long pursuit, Psycho loses Lee. He moves on to find Eagle Team and they fight their way against the Ceph to the Pacific Shore Mine. When they reach the mine, Psycho departs from the team and fights his way through the mine. When he finally reaches the exit, he catches a train that is carrying the container. After a short ride on the train, he reaches a bridge of Ang River and tries to call O'Neill to extract the container at the bridge where it is blocked, but O'Neill does not respond and Psycho is interrupted by Colonel Lee and his men. Lee commands his men to drop the engineer, but Psycho is able to grab the engineer. However, the engineer begs Psycho to drop him so he can detonate the bridge and stop Lee, which Psycho follows. But Psycho fails and has to invade the airfield to capture the container. Psycho fights against both KPA, Ceph aliens, and a modified Hunter until he secures the airfield and extracts the container along with O'Neill back to the USS Constitution.

En route to rescuing Prophet, Psycho's VTOL was shot down by the Ceph and blown up as they were getting out, knocking over everyone and severely injuring Nomad. Prophet came to their rescue and defeated the giant bipedal Ceph. When they got to safety, Prophet explained what the mission's purpose really was.

Psycho feels sympathetic towards Prophet, but is exasperated at the fact that the aliens are "squid" and "calamari". He then takes a shortcut through the alien ship with the rest of the survivors in order to reach Hargreave's private vessel for extraction. Unfortunately they are discovered by the Ceph inside and forced to step through a portal.

When they step back out, they find that they've traveled 18 hours back in time. Psycho has difficulty comprehending this fact, but they continue to the rendezvous point anyways. There, they are betrayed by the boat's crew, who shoot them and disable their suits with a powerful EMP.

Once on board, the immobilized Psycho is beaten up by their captor, Norman West, who had been tracking Prophet ever since he was beaten up at Panama. When the EMP blast from Admiral Morrison's nuke frees them, they proceed to kill the crew and look for Nomad. When they are shot at with a rocket launcher, however, Nomad appears and takes the hit, sacrificing himself. Psycho stays back to check on Nomad while Prophet leaves to execute West. After mourning Nomad's loss, they decide to take their data to Hargreave, who may be able to help them.

Though Psycho does not appear in Crysis 2, Prophet reveals in a flashback that all the surviving Nanosuit users have bonded with their suits. Jacob Hargreave claims they've become "post-human warriors", while Prophet calls them "dead men walking".

He cooperated with Prophet and other Nanosuit users in many missions before the events of Crysis 3 (but after Crysis 2), hunting Ceph locations where Prophet believed the Alpha Ceph to be.

It is revealed that he was "skinned" out of his nanosuit by CELL, who was interested in researching it, since Karl Rasch had erased all data related to the nanosuits prior to leaving the company. Other nanosuit users were also skinned, and only one functional nanosuit remained, the one Prophet uses.

In a secret ending he is seen hunting the CELL board of directors with seemingly superhuman abilities and possibly along with an unknown entity. It is possible that he somehow came into contact with Ceph technology that gave him abilities similar to those of the nanosuit or that he is becoming something akin to what Karl Rasch was (a human with Ceph parts [and/or technology] integrated into his organic systems).

While having a strong sense of devotion to everything he does and believes in, Psycho has a more emotional outwardness than Nomad, and is far more social, often cracking jokes or commenting on events and surroundings. Psycho will often speak out what he believes is best and is willing to disobey orders to do what he thinks is right, much to the chagrin of his superiors. Psycho is not one to abandon friends and will go out of his way in order to help out, such as his determination to rescue O'Neill who was in hostile territory after surviving a plane crash. Psycho, adhering to the principles set by his superiors, follows his own code of honour (one notable example of this was his refusing to kill a KPA soldier who was not armed.)

Psycho also has a thick Cockney accent and a very colorful vocabulary, likely due to his English heritage and involvement with the SAS. Psycho tends to use particularly British profanity.

Throughout the game, Psycho is shown to skillfully handle most, if not all, weapons and vehicles in the field. He is capable to pilot a VTOL with relative professionalism, and is able to modify any weapon during a battle in the field.

During their mission to rendezvous with Hargreave's boat, he continues to trust Prophet despite the fact that he is working for Jacob Hargreave. Time travel is incomprehensible to him, though he remains fairly light-hearted, even telling Nomad to lighten up and stop being a "twat". However, they are betrayed at the rendezvous point by the boat's crew, who opened fire on them without warning and disabled their suits with a powerful EMP.

Psycho shows a great amount of trust in Prophet even after being hauled on board, likely because Prophet isn't keeping any secrets from him. Psycho also cares deeply about Nomad. 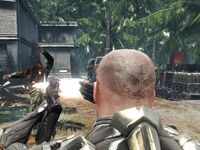 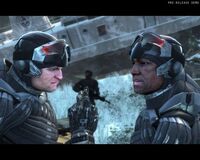 Michael has tendencies to argue with his superiors although they often found his arguments as a sign of disrespect. In this case, he engages Prophet in yet another one of their arguments

Psycho as he appears in Crysis 3