The SCARAB or the Mk.21 Superior Combat Assault rifle, was introduced in 2018 and manufactured by US-based Scrutch Industries, the SCARAB is a more compact, flat-top carbine variant of the SCAR assault rifle. It appears in Crysis 2 and Crysis 3.

Introduced in 2018 and manufactured by US-based Scrutch Industries, the SCARAB is a more compact, flat-top carbine variant of the SCAR assault rifle. Utilizing advanced rifle cartridges that are smaller than the previous 5.56mm rounds, the SCARAB offers increased ammunition storage per-magazine with zero impact on combat effectiveness. The SCARAB differs from the SCAR in its shorter barrel, which optimizes the weapon for close-quarter combat, and a higher cyclic rate of 900 rounds per minute compared to 700 on the SCAR.

Part of the Superior Combat Assault Rifle weapon family comprising the SCARAB, the larger SCAR assault rifle, and the SCARE sniper variant, the weapon is mainly used by US Special Forces. Recently, the SCARAB has also seen extensive deployment in the police and private sector. It is a valuable alternative to submachine guns, offering a compact design without sacrificing fire-power.

The weapon can mount a variety of attachments including a silencer, under barrel shotgun, and combat scopes, making it excel at close quarters combat while offering the versatility to adapt to new combat situations on the fly.[1]

SCARAB is the first rifle the player will find, and also the most versatile. It is also the only one which can mount a silencer, making it invaluable for players who prefer the stealthy approach. A single bullet fired from the silenced SCARAB will drain about 40% of player's Energy when cloaked. It has higher movement speed than the SCAR, and the higher rate of fire can help out in close range, but the SCAR does more damage, is slightly more accurate, and has longer range. C.E.L.L. soldiers use the SCARAB a lot, so finding ammo should not be a problem if there are no ammunition cache.

The SCARAB can not be equipped with an Assault Scope or Sniper Scope. Since it is also the only assault rifle to equip a silencer, this means you are no longer capable of the deadly combination of scope and silencer, which was so useful in the first Crysis, unless you use the sniper rifle, the DSG-1. That being said, the reflex sight is still very accurate, and if you have good enough eyes, you can still (carefully) headshot enemies from great distances. If an enemy is extremely far away, the AI may not even register hits, allowing you to simply get 5-ish body shots to kill them in complete safety.

In multiplayer, the SCARAB is purchasable at rank 27.

In Multiplayer, the player will unlock a C.E.L.L. camouflage for the SCARAB after the third Reboot.

SCARAB returns in Crysis 3 as SCARAB Mod 2. As in Crysis 2 it uses 4mm Sabot Scar ammunition and has a high rate of fire, making it best for medium to close range combat. Fire in short, controlled bursts for better accuracy. 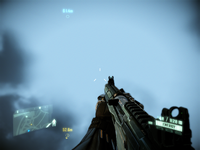 The SCARAB in Crysis 2 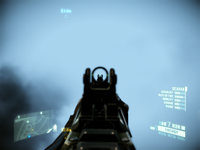 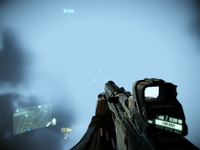 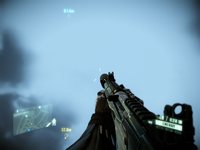 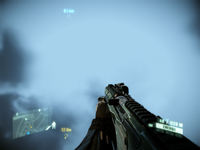 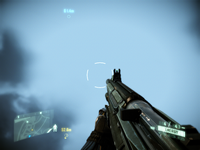