"Second Chance" is the second mission of Crysis 2.

Alcatraz wakes up in a dockhouse, wearing the Nanosuit 2, and finds the man who saved him earlier is now dead. He then proceeds to take the man's pistol, but suddenly has a flashback in which he sees the man, Prophet, who tells him that he is contaminated with the aliens' virus. He then tells Alcatraz that he must break the symbiosis with the suit in order to give Alcatraz control over it, and proceeds to shoot himself in the head. Alcatraz then goes to the exit where he learns about some of the capabilities of the Nanosuit, like power jumping and fast sprinting.

When he exits the dockhouse the Nanosuit activates a new mode - The Tactical Visor. Here, he witnesses C.E.L.L. troops executing unarmed Marines. He gains some ammo for the pistol and moments later, after killing the two C.E.L.L. troops, his "first" assault rifle - The SCARAB. Fighting his way outside he receives messages from a scientist named Nathan Gould, who is mistaking Alcatraz for the man who was previously using the suit, Prophet. Gould instructs Alcatraz on where to find him, but the latter is repeatedly attacked by armed members of a private military force named C.E.L.L., who have a grudge against Prophet. Alcatraz makes his way around the area, where the Nanosuit activates another ability: Stealth Mode.

Proceeding to a heavily guarded C.E.L.L. checkpoint, Alcatraz makes his way through and enters the now devastated Manhattan. After little walk in the Manhattan area, he encounters a small C.E.L.L. patrol in an alley, where he is instructed on the Nanosuit's Armor Mode. After dispatching the troops, he acquires M17 Frag Grenades on the roof of a coffee bar and starts bombarding more C.E.L.L. troops on the street below. After clearing the area, he goes into a subway, where he is instructed to use Nanovision. The subway turns out to be infested with Ceph Ticks, and Gould suggests Alcatraz exit and find another route. After ascending from the subway, the level concludes. 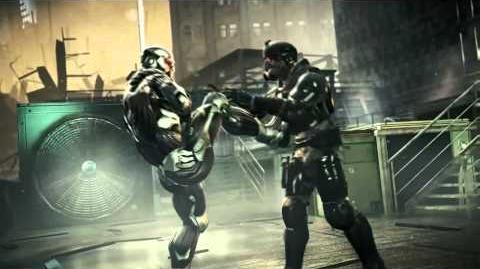 Crysis 2 Intro
Opening Cinematic for "Second Chance"
Add a photo to this gallery
Retrieved from "https://crysis.fandom.com/wiki/Second_Chance?oldid=35002"
Community content is available under CC-BY-SA unless otherwise noted.