"Sudden Impact" is the third mission of Crysis 2.

It involves the attempts of Alcatraz to recover alien tissue from the crash site of a Ceph gunship shot down by C.E.L.L. helicopters.

Alcatraz, after being contacted by Nathan Gould, proceeds to go to his location, which is his lab. In the middle of chaos, a Ceph Gunship has been shot down by C.E.L.L. and Gould, excited, asks Alcatraz to take bio-samples of the Ceph. Commander Dominic Lockhart of C.E.L.L. orders his troops to patrol the crash site. After going inside the ship, it was revealed that it was carrying melted human tissue and no Ceph anywhere, to Gould's displeasure. It also reveals that the Manhattan Virus melts the human for easy disposal.

Outside, Alcatraz meets his first Ceph alien, whom is a Stalker, and proceeds to kill it. Taking the Ceph's bio-samples, the suit goes awry by meeting the Ceph organism's cell. It starts rewriting the biocode of the cell to make a viable cure. Gould hints Alcatraz to go through the freeway. After defeating both Ceph and C.E.L.L. forces, he finds an entrance to the freeway. Going in, the entrance of the path gets blocked by rubble. The next mission, Road Rage begins. 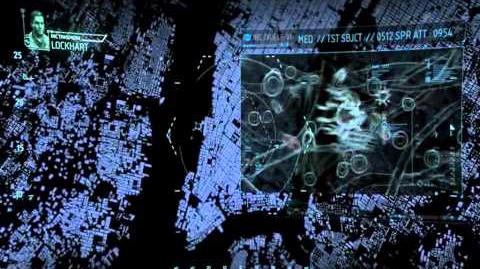