"Terminus" is the fourteenth mission of Crysis 2.

Alcatraz enters Grand Central Station where Barclay is evacuating civilians. Gould appears and demands to be allowed to stay in the city to help, but Barclay orders him evacuated on the trains as he is a civilian. He explains that Tara Strickland must have let him go for a reason. The station comes under attack by Ceph forces, and Alcatraz assists the military in fending them off while the subway cars are sent away. Alcatraz and the marines attempt to escape Grand Central Station as it is attacked by the Ceph. The MetLife Building sustains heavy damage and begins to collapse on the terminal, causing Marines to arrive in a Jeep and evacuate Alacatraz.

As they emerge from the terminal, other Jeeps and a tank, covered with Marines, attempt to escape the collapsing building. Alcatraz's jeep stops as a civilian screams for them to wait, as his wife and another man attempt to make their way out of the rubble to reach the Jeep. Unfortunately, the Marines have no time to spare and speed away without the civilians, as the building collapses onto the terminal and sends rubble covering the streets. 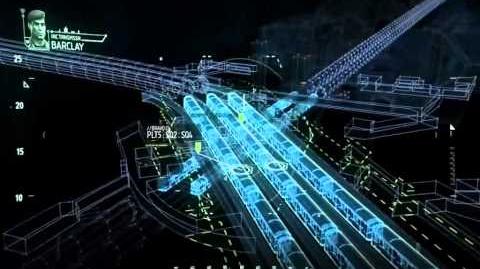