The Typhoon features a 720-round tube-like chamber magazine that supports extreme 30,000 rpm rate of fire that drains said magazine very quickly. It is first seen in the Crysis 3 E3 2012 demo (with a reflex sight mounted).

Players are able to carry two whole magazines (a total of 1440 rounds). Compared to the Mk.60, the Typhoon is a man-portable "minigun" that sacrifices accuracy and stopping-power for an extreme shot-density and multi-target suppression capacity. This highly destructive weapon system was designed for decimating hordes of Ceph infantry and dropships in a matter of seconds. The incrediblely dense spread makes it extremely probable to "critical hit" an enemy's most vulnerable or unarmored spots; even when not aimed at.

The Typhoon is very inaccurate and difficult to control, so it should usually be fired in short bursts. However, it is a surprisingly effective sniping weapon. A single burst can kill a C.E.L.L operative but occasionally two will be needed, typically against Enforcers, which sometimes carry Typhoons. The Typhoon is, however, somewhat of an overkill on C.E.L.L infantry so it should be used almost exclusively against Ceph if the player wishes to conserve ammunition. 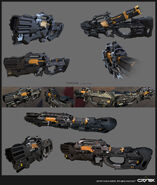