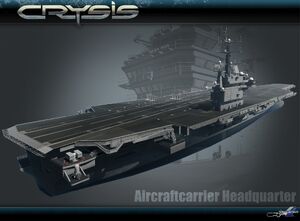 The USS Lexington was one of the three carriers sent in to provide air support during the events of Crysis. The carrier would have sent Jet and VTOL's in to support the assault and evacuation. Some evidence suggests this as the USS Constitution had quite a lot of jets parked on board when Nomad arrived. During the assault on the island, the carrier was supported by several destroyers to form a Carrier Strike Group northeast of the Constitution. The Strike Group was as big as Admiral Morrison's.

Contact was lost with the USS Lexington during the final stages of the game and it can be presumed to have been destroyed. The Warrior most likely sunk the carrier, as there is nothing that is shown or mentioned bigger than that alien.

Retrieved from "https://crysis.fandom.com/wiki/USS_Lexington?oldid=25494"
Community content is available under CC-BY-SA unless otherwise noted.