Start a Wiki
EA and Crytek announced today that the latest installment of the Crysis series is in production! 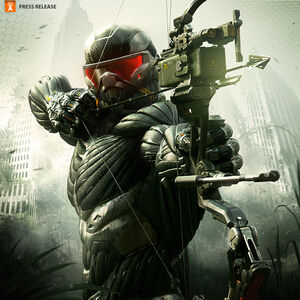 Laurence "Prophet" Barnes returns to New York City, only to find out that the city has been over-run by the evil Cell Corporation. The city is encased in a Nanodome, called the Liberty Dome, that is divided up into seven distinct areas known as the Seven Wonders. Prophet will utilize a lethal composite bow, an enhanced Nanosuit and devastating alien tech to become the deadliest hunter on the planet.

The best part is that you can preorder the Crysis 3 Hunter Edition right now! It includes early access to the new signature bow and its attachments, plus the Hunter Nanosuit module in multiplayer. Other multiplayer bonuses include a bonus XP boost up to level 5, a unique bow skin and three exclusive dog tags. There are other special pre-order packs as well including the Stalker Pack. This comes with the base game, all Hunter Edition content and early multiplayer access to the semi-auto Jackal shotgun. This powerful, close-range shotgun comes with a silencer attachment, custom weapon skin and two themed in-game dog tags.

The Overkill Pack includes the base game, all Hunter Edition content and early multiplayer access to the Typhoon assault weapon and skin. Spewing 500 rounds a second, the Typhoon gives players the ability to go guns blazing to take back the Liberty Dome. Also included are two Overkill themed in-game dog tags.

The Predator Pack includes the base game, all the Hunter Edition content and early multiplayer access to the Feline submachine gun and exclusive camo. With an extremely fast rate of fire and a 60 round magazine the Feline is highly effective and deadly, at short range. Crysis 3 will be out in spring 2013 for the Xbox 360, PlayStation 3, and PC.The Crysis 3 Hunter Edition is available on Origin.com and stores for $59.99.

Retrieved from "https://crysis.fandom.com/wiki/User_blog:Soldierscuzzy/Crysis_3_Announced!?oldid=23606"
Community content is available under CC-BY-SA unless otherwise noted.