MV-24 VTOLs are the primary heavy air transport and combat vehicles used by the U.S Marine Corps throughout Crysis, Crysis Warhead and Crysis 2 and also C.E.L.L. in Crysis 3. VTOL is an acronym for Vertical Take-Off and Landing.

VTOLs are easily distinguishable from helicopters due to their lack of rotors and their much larger size. They utilize movable thrusters that are aligned vertically for take-off and landing, and align horizontally for forward movement.

Both types of VTOLs, the heavy quad engined version and the lighter version are equipped with a 20mm M61 Vulcan turret on the front of the aircraft under the cockpit, are fired by the gunner while the pilot may fire a forward machine gun and launch missiles. This is most easily seen in Crysis 2, when a Heavy VTOL strafes a Pinger at the Times Square evac site.

In Crysis warhead they could also be seen on player created maps with oddities such as miniguns instead of the standard machine guns,nuclear launchers or so on replacing the other weapons along with cloaking (Which would still show the pilot and any passengers when not cloaked themselves) varaints.

In the singleplayer mode, VTOLs are used by the U.S forces for primarily troop transportation,though in Ascension, the player pilots a VTOL while fighting Alien Scouts. VTOLs can only carry six missiles at a time (12 in Ascension), making them much less useful for anti-armor and more useful for transport and anti-personnel uses. VTOLs also tend to be easier to pilot than helicopters.

When the player pilots one in Ascension, your damage bar will slowly regenerate.

In Crysis 1 and warhead's Multiplayer ,VTOLs are used as a mix of transport and air supremency fighter

In Crysis 3's Multiplayer, a VTOL flies around the map and functions as additional way to get across the terrain. It also has a usable turret. 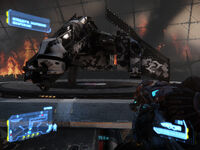